Ghent-based designer Bram Vanderbeke has sculpted a series of abstract furniture pieces from blocks made of concrete waste that are treated with pigments and waxes to give an unexpected texture.

The New Primitives collection features a series of side tables and benches that have been treated with stone wax, commonly used to treat marble sculptures, to create textured furniture items that resemble neolithic structures.

Inspired by the anthropocene era – a contested term used to describe the period in which human impact has become the dominant force on the earth's geology – the aim of the project was to treat the concrete like a natural material, which Vanderbeke believes makes the material feel more valuable.

"In the future, I believe that we will be able to harvest man-made materials just like we already harvest natural materials," Vanderberke told Dezeen.

"I wanted to sculpt waste blocks of concrete and treat them like a sculptor would treat a valuable stone such as marble," he explained.

The side tables feature a round surface with four supporting legs. The pieces have a rugged texture that resembles that of prehistoric structures made from natural stone.

Meanwhile, the benches are made of narrow rectangular blocks with four legs and feature a similar texture to the side tables. 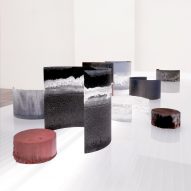 Vanderbeke began by using an angle grinder to shape the concrete blocks, before treating them with rock polish and concrete pigment and varnish.

An increasing number of designers are investigating the effects of the anthropocene era through installations, exhibitions and products.

These include Xandra van der Eijk, whose installation aims to demonstrate how chemical waste dumping is affecting the earth and the Design Invertuals exhibition at this year's Dutch Design Week, which displayed ten objects that question whether it is possible to reduce the volume of non-essential products in our lives.