London-based design studio Haberdashery has come up with a concept for bringing light into built-up cities where the natural light is blocked from view by tall buildings.

Comparing modern cities to light-starved rainforest floors, the London-based brand wants to use the huge Helio Ray reflectors to redirect sunlight from above the skyline and bring it back down the side of buildings.

Designed to be mounted on the top of a tall building, the sculptural lighting concept uses two large mirrored discs that collect and reflect the suns rays.

The first is a heliostat – a mechanised mirrored surface that automatically tracks the sun and gathers it into a concentrated beam.

The heliostat abstracts this beam of light when reflecting off a second custom-designed reflector that sends the resulting shafts of light down the side of a building, creating what Haberdashery describe as "god ray" effects.

The second reflector is comprised of a faceted surface that warps and distorts in a controlled manner under the heat of the sunlight itself.

This slow variation in the surface of the reflector creates a slowly evolving pattern of calming reflected light, while controlling the extremities of the overall light effect so as to only fall on specified building surfaces. 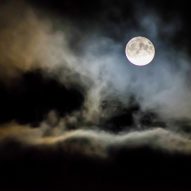 Conceived as an extension of the actual sun's reach, the rays of light reflected from the Helios Ray will come and go as the sky clouds over and clears.

The studio said that although conceptual, the design is based on "solid engineering knowledge and innovation" and will be is large enough to be visible from all surrounding buildings.

"Sunlight has a huge effect on our physiology and wellbeing," explained Ben Rigby creative director at Haberdashery .

"It influences our circadian rhythms, provides vitamin D and illuminates our environment, bringing the true colour out of the surfaces, architecture and the urban grain."

"Our ambition was to create a focal point using sunlight in order to reinvigorate areas that had become disenfranchised from the life-affirming effects of the sunshine from way above," he continued.

The Helios Ray is one of several lighting concepts by the London-based design studio that are directly inspired by the sun.

The Dawn to Dusk lamps that change colour as they move up and down, to resemble the rising and setting sun were previewed at Maison & Objet in September, while the Canopy pendant lamp casts dappled light reminiscent of sunshine filtering through leaves.