Architecture studio GRAS has transformed a derelict cottage in the Scottish Highlands into a pared-back contemporary holiday home by slotting a series of oak-lined "boxes" inside the existing stone structure.

The Edinburgh-based firm, headed by architect Gunnar Groves-Raines, oversaw the renovation of Kyle House for preservation and hospitality organisation Wildland, which has restored several historic properties in Scotland.

The two-storey house is situated at the tip of the Kyle of Tongue and is the only inhabited property to enjoy uninterrupted views along the length of the sea loch.

The existing property most likely dates from the late 19th or early 20th century and is believed to have been built using the remains of a 2,000-year-old iron-age building that occupied a hilltop above the site.

When GRAS first got involved in the project the building was an empty shell, with a tin roof sheltering a damp void inside the stone walls.

Working alongside Wildland's head of design, Ruth Kramer, the studio proposed a faithful renovation of the exterior using traditional materials including stone, lime render, lead and slate, but suggested that the interior be completely modernised.

"There was nothing left inside and no evidence of what had existed originally," Groves-Raines told Dezeen, "so we felt it was a blank canvas to do something different internally that was contained within the restored exterior shell."

The existing building only had windows on the front, with none on the gable ends. As a result the interior was dark and there was a need to bring more light in.

The main intervention in the exterior involved cutting new openings into the rear elevation and both gables, which increases the amount of daylight reaching the interior and provides views of the surrounding landscape.

The architects had a rough idea of the building's original layout and were keen to maintain its symmetry as much as possible, while opening up the interior spaces to make the most of views in all four directions.

The interior is conceived as "a series of finely crafted oak boxes" inserted into the stone shell. These crafted timber volumes help to create a simple, modern aesthetic that contrasts with the ancient materiality of the exterior.

"We wanted to make a clear distinction between what is original and what is new," Groves-Raines added. "The humble use of materials and almost monastic simplicity of the design places greater emphasis on the space and landscape."

The property is intended for use by a couple, so there was no need to separate the spaces. The oak joinery incorporates sliding doors that provide privacy when required, but are almost invisible when open. 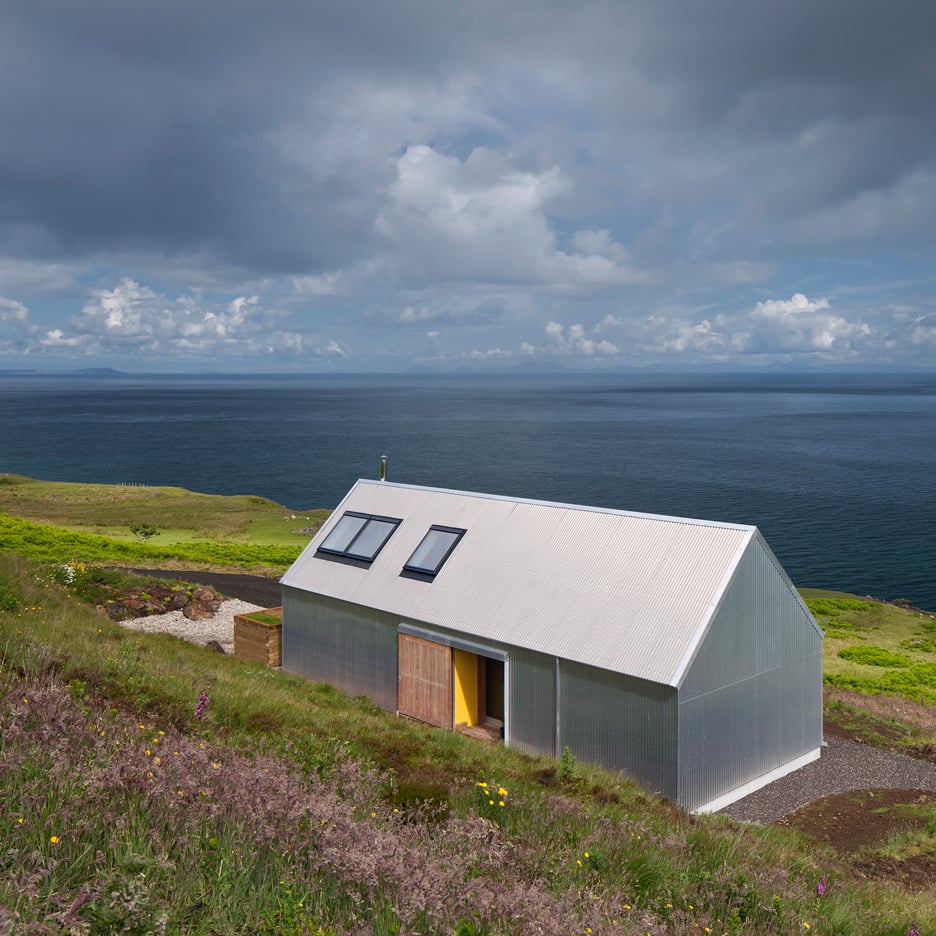 Throughout the interior, equal emphasis is given to spaces for sleeping, eating, living and bathing. Only essential objects such as the kitchen units and fireplaces are added to the pared-back rooms.

The kitchen and living spaces are situated on either side of the entrance on the ground floor. Each room features a large deep-set window that frames a view of the wild landscape.

In the living room, a window seat extends to meet the base of the open hearth, while a similar timber structure in the kitchen forms a bench for the dining area.

All of the joinery, including the window reveals and kitchen units, is constructed from the same Danish oak to enhance the feeling of consistency throughout the rooms.

Locally mined Caithness stone used for the flooring is polished to create a tactile and subtly glossy finish, and its dark tone is echoes by details such as the metal window frames and light fixtures.

On the upper floor, a circulation and storage space separates the bedroom from a generously proportioned bathroom, with the bathtub positioned next to a window that provides a view looking east towards Ben Loyal.

Renovating remote cottages is an attractive prospect in Scotland, where the scenery lends itself to secluded retreats.

When restoring an old granite farmhouse in the Scottish Highlands, British studio Moxon added an extension in larch and red metal in a matching gabled profile. Meanwhile Edinburgh-based practice A449 recently turned a 20th century cottage on the Scottish Borders into a writers home, cladding the structure in scorched larch wood.

Photography is by Martin Kaufmann unless stated.