Los Angeles art duo the Haas Brothers' first retrospective exhibition has opened at The Bass museum in Miami Beach, filled with their "fantasy reality of flora and fauna" in a spectrum of hues.

Named Ferngully after a 1992 animated film, the exhibition opened this week to coincide with the Art Basel fair and other events taking place across the Miami area.

Twins Nikolai and Simon Haas have taken over two rooms on the ground floor of the recently renovated Bass Museum of Art, showcasing a progression of their furniture and sculpture – from early works to pieces created specifically for the show.

Three years in the making, the loosely chronological exhibition is summarised by the brothers as "a personal journal of our last several years" and "a portrait of our brotherhood".

"Each piece somehow almost holds a moment of emotional output for us," Nikolai told Dezeen. "It just feel into place as a journal."

Visitors first encounter a variety of pieces from the Haas' beasts series, which range in size from handheld figurines to a chaise lounge.

Covered in hair and featuring bronze limbs, the monsters gained the twins international acclaim and led to a host of commissions – including for Bass president George Lindemann, who helped them secure this show. 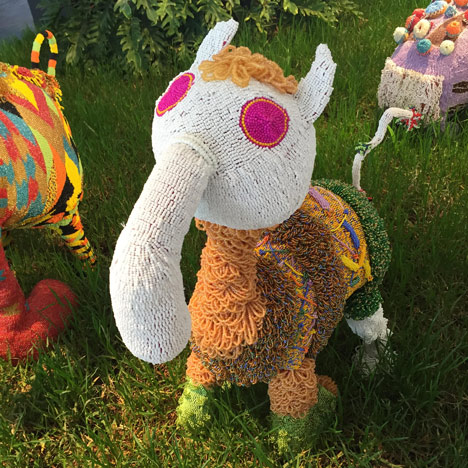 The exhibition also demonstrates the gradual introduction, and then rapid progression, of colour in the artists' work. They credit this shift to their experience working with bead artisans in South Africa – the outcome of which is displayed in the show's second space.

"When we did our project in Africa, these women we collaborated together with on these pieces really cracked our brain for colour," said Nikolai. "After that, literally any colour is fair game."

This injection of bold hues manifests as a set of palm tree structures, with parachute cable trunks and intricately beaded fronds and fruit.

Accompanied by two brightly coloured furniture pieces and presented against a purple background, these designs mark the start of a new "language" that the duo will continue to explore.

"It's really an evolution," said Simon. "We always have plants and animals in our work, it's own fantasy reality of flora and fauna, and they've just been evolving into where they are right now."

Running until 21 April 2019 at The Bass, 2100 Collins Avenue, Ferngully is one of several exhibitions opening during Miami art week.

These include the Design Miami fair – where the Haas Brothers will also be showing with New York gallery R & Company. See our guide to other highlights open during the week. 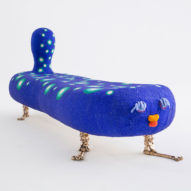 Read on for an edited transcript of Dezeen's interview with the Haas Brothers:

Dan Howarth: Please describe the exhibition to me.

Simon Haas: It's kind of a personal journal of our last several years. We were offered this show three years ago, and we've been through so much personally on the way here. It's kind of a portrait of our brotherhood, which we can see clearly but I'm not sure if anyone else sees that.

Nikolai Haas: To us it's plain as day, everyone else is like what the f*ck.

Simon Haas: It's really an evolution. We always have plants and animals in our work, it's own fantasy reality of flora and fauna, and they've just been evolving into where they are right now.

It's kind of cool for us to see them all together too, because we can see where we started with the beasts and then moving through our South African project. The new pieces are really in the same vein as the beasts were doing but with a major South African spin on them. And all of this new work as also inspired by our trips there.

Nikolai Haas: There's almost a chronological movement to the exhibition, from early to the future. Each piece somehow almost holds a moment of emotional output for us. It just feel into place as a journal.

Dan Howarth: What's your working process like? How is it divided up between the two of you?

Nikolai Haas: Simon is the materials genius in the family. He's constantly thinking about how to use a material in a different way, and make it sing. This is parachute cable and sh*tty beads from China and it's like one of the most beautiful things you've ever seen.

Simon Haas: And Nicky's the sculptor. All of the spirit and attitude in all of the work comes from him. I'm kind of the surfaces guy. There's actually a book called Surfaces and Essences, and I think that describes us well: I'm the surfaces; he's the essences.

Nikolai Haas: Then the real thing about the work that's important is you're creating an aesthetic to get something across. We're just talking about the practical application of our jobs – he does surfaces, I do sculpture, we both work on aesthetic and colour choice.

But the meat of the work is actually the philosophy behind it, and we do all of that completely together and there's no way to separate where that comes from. Which is as it should be.

Dan Howarth: Colour is obviously key in your work. How did that come about?

Nikolai Haas: You see the front is very blacks and tans and golds, then the ceramics there's some colour. When we did our project in Africa, these women we collaborated together with on these pieces really cracked our brain for colour. After that, literally any colour is fair game. There's no palette, it's all about just putting things together.

Simon Haas: People respond to different colours based on how they feel at the moment. We sit down with a red-green-blue colour cube and both us say "I like this area" and "I like that area", and we merge them together.

That's what the whole palette of the exhibition is – this is what we're feeling right now, which is really cool. I love purple. I really believe in synesthesia. This is not musical but it's really about a feeling.

Dan Howarth: What's next for the Haas Brothers?

Simon Haas: We'll probably stay in purple for a while, probably. I like purple and yellow right now.

Nikolai Haas: We have a show with Marianne Boesky in New York, September 2019. I think we'll be in Frieze London, not sure, probably Hong Kong this year too.

Simon Haas: More of this stuff. These are really the first pieces we've made in this set, in this language, so there'll be a whole lot more of this.

Nikolai Haas: I've been obsessed by the idea of the Madonna, and what that actually means and represents in society, and that's what we're exploring for our next show. I can't tell you exactly what that means yet because we're still figuring it out. But like ancient fertility goddesses.

Dan Howarth: And larger scale is something you're sticking with?

Nikolai Haas: It's all private, but we're doing a lot more large-scale. At some point in the future, we will do a large-scale sculpture show. We can't talk about it yet, but it's going to be f*cking cool.