Natural and digital systems could be blended together to create new kinds of electronic devices, according to Massachusetts Institute of Technology (MIT) researcher Harpreet Sareen, who has built a robot controlled by a plant.

The hybrid creation, called Elowan, has a wheeled robot attached to its base and electrodes embedded in its leaves and stems.

The electrodes pick up weak bioelectrical signals the plant produces naturally in response to light and other environmental changes. These signals trigger the robot to move, bringing it closer to or further away from a light source.

Sareen is a research affiliate at the MIT Media Lab's Fluid Interfaces group, and worked with lab founder Pattie Maes to develop the project.

He sees Elowan as a work of "cyborg botany" and "an attempt to demonstrate what augmentation of nature could mean".

"Plants have natural capabilities of growing like a 3D printer, water uptake like a natural motor, leaf movements like a display and so on," said Sareen. "If we combine these together, it starts to become clear how hybrid plants can step into the domain of interaction that we have been moving away from." 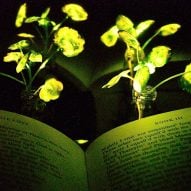 Sareen says that in the future, he can imagine plants or trees used as sensors that are integrated with gadgets. This could be advantageous in some scenarios because, unlike most human technology, plants are self-repairing, self-powered and self-growing.

"The plants could be used as sensing platforms for monitoring their own health, minute changes in the environment or to give rise to new organic interactive devices," said Sareen.

"Instead of building completely discrete systems, the new paradigm points toward using the capabilities that exist in plants (and nature at large) and creating hybrids with our digital world," he continued.

Sareen describes Elowan's plant as having agency over its attached robot. If the plant produces no bioelectrical signals, then the robot doesn't move.

Besides light, other environmental factors that would trigger similar bioelectrical signals include changes in temperature, gravity and soil conditions.

Sareen is a New York-based interaction designer, scientist, artist and educator. In addition to his work with MIT, he is an assistant professor of media and interaction design at Parsons School of Design, New York, and previously worked with Google on a voice-activated terrarium called Project Oasis.

He hopes to develop Elowan into a DIY robot kit for tinkerers. Earlier this year, fellow MIT researchers took the first step towards turning plants into lights, by embedding the enzyme that makes fireflies glow into their leaves.