Canadian fashion brand École de Pensée spent 250 hours creating the worn-out textured walls of its new flagship store in Montreal, which looks more like an apartment than a shop.

École de Pensée created the homey new boutique on the city's Laurier West Avenue to host its seasonal and permanent menswear collections, alongside accessories and home objects by European and Japanese collaborators the team met while travelling.

To complement this mixed display, the brand designed the 1800-square-feet (167-square-metre) space with "apartment-inspired decor".

"The ambiance proposed is calm and welcoming, reflecting the brand's ethos," said École de Pensée in a project description.

A rough finish across the walls, which the team spent hundreds of hours crafting with trowel hammers, sponges, water and paint spray, provides a backdrop for the shop.

"It's a blend of different tones of paint, plaster, water, glue and a clear wood varnish to seal the surface," École de Pensée co-founder William Lessard told Dezeen.
"It took us about 250 hours to achieve the final result."

The finish offsets the clean white lines of ornate mouldings along the space, while its darker tones pick up the hue of the wooden flooring. 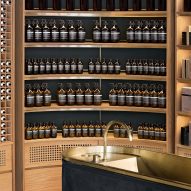 École de Pensée teamed up with a local steel-cutting workshop to custom-make these geometric structures, which range from stepped designs to others that dangle from the ceiling.

The studio's creative team also poured different-sized concrete blocks on site to form the checkout desk, as well as platforms for shoes – including additional designs by Tricker's, Kleman and Reproduction of Found – and folded garments.

Additional elements include set-ups that mimic homey interiors. For example, a warm-hued wooden shelf is built onto one wall to showcase ancillary designs, which include products by ceramist Hasami Porcelain, glassmaker Toyo-Sasaki Glass and the Danish apothecary line Frama.

To complement this detail, the team has added a woven chair with a throw over the top, and a concrete block with a water jug and glass.

A second lounge-style area is set up at the rear of the shop, featuring vintage pieces by mid-century Danish designers Finn Juhl and Poul Cadovius.

Two dressing rooms allows customers to try on clothing in privacy, while a series of mirrors are interspersed throughout the store.

Founded in 2014 in Montreal, École de Pensée opened the flagship in October 2018, following a period of renovation work on Laurier West Avenue.

A number of other spaces completed with similarly experimental design approaches have also recently opened spaces in the city. These include a veterinary clinic featuring exposed bricks and concrete, and a nail salon with a large floral pink column at the centre.