The Italian house marked its 10th anniversary at last week's fair with The Shapes of Water, an installation that included Marcelis' fountain designs that all relate to the company in some way.

"Using water as a design tool, the designer magnifies its delicate beauty by realising 10 fountains inspired by 10 of the most iconic symbols of the historical Roman house," said a description from Marcelis.

Fendi's Design Miami booth comprised an entirely white room with an illuminated back wall, in which the water features were placed on travertine plinths at different heights.

Some of these bases for the warm-hued, cast-resin sculptures hid mechanisms that pumped water up through.

Examples included the Palazzo della Civiltà Italiana fountain, based on Fendi's headquarters in Rome. The arched colonnades of the 1943 Mussolini-commissioned building, which the brand moved in to in 2015, were replicated across the sides of the resin design.

"Marcelis has realised a similar structure adding an evanescent aspect, descending from the grandeur of the original construction," said the project description.

Fendi's "double F" logo – created by Karl Lagerfeld in 1965 during his tenure at the company – was punched into a horizontal slab of yellow resin, with water resting in the carved void.

The same mark appeared in the centre of a cube-shaped block, where the two internal, vertical letters were filled with bubbling liquid.

A tall design carried a gradient that blended from yellow to red, mimicking the sunsets in the Italian capital, while water cascaded down its slightly slanted front.

Fur and leather patterns, for which the brand is perhaps best known, were recreated as textured motifs across fountains named Labirinto, Astuccio and Tegole.

Others, including Selleria and Intarsi, were based on the hand-craft and manufacturing processes used to make Fendi's garments and accessories.

In celebration of another 10-year anniversary, Marcelis also created a cast-resin version of the brand's Peekaboo bag, which was displayed on a bed of water at the entrance to the Design Miami booth. The fair took place 5-9 December 2018 in Miami Beach. 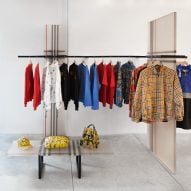 "It is through clean and soft lines and the use of ethereal materials such as polished resin and water in contrast with the historical travertine stone, and warm colours reminiscent of the Roman skies, that the fountains of Sabine Marcelis represent the perfect fusion between the historical, creative and aesthetic legacy of Fendi and its courage to provoke," the brand's statement said.

Fendi was founded by Adele and Edoardo Fendi in 1925, and the house has since grown to become one of the world's most famous luxury labels. Recently, the brand's ties to fountains include its efforts towards preserving Rome's iconic Fontana di Trevi and others across the city.

Marcelis has previously used resin in a project for another fashion brand. Earlier this year, she cast the material to recreate Burberry's signature tartan pattern for a set of displays at Opening Ceremony stores in New York and Los Angeles.