Artist Edoardo Tresoldi has placed a sculpture featuring faces fashioned from wire mesh on a rooftop overlooking a Barcelona street.

The site-specific public artwork, called Limes, is lined up along the edge of the building's roof and is made up of six mask-like reliefs of human faces shaped from wire mesh, that each stand 5.5 metres tall.

The installation was produced to mark the 25th anniversary of L'illa Diagonal, a shopping centre in Barcelona that is home to many fashion boutiques.

The L'illa Diagonal building was designed by architects Rafael Moneo and Manuel de Solà-Morales. Tresoldi described the process of relating his work to the specific location as a "interesting challenge".

"Also, its appealing design, such as the regular composition of the façades and the heights, really inspired me," the artist told Dezeen.

As viewers walk around the base of the building and look up, the overlapping of the wire mesh creates shadows. The faces are silhouetted against the sky during the day, and lit up with lights at night.

"Arranged in sequence, the sculptures follow one another by alternating visual harmonies and volumetric tensions and revealing their contents either gradually or at once," said Tresoldi's studio.

"Depending on the perspective of the observer, Limes evolves while its elements capture the light and blend with the sky." 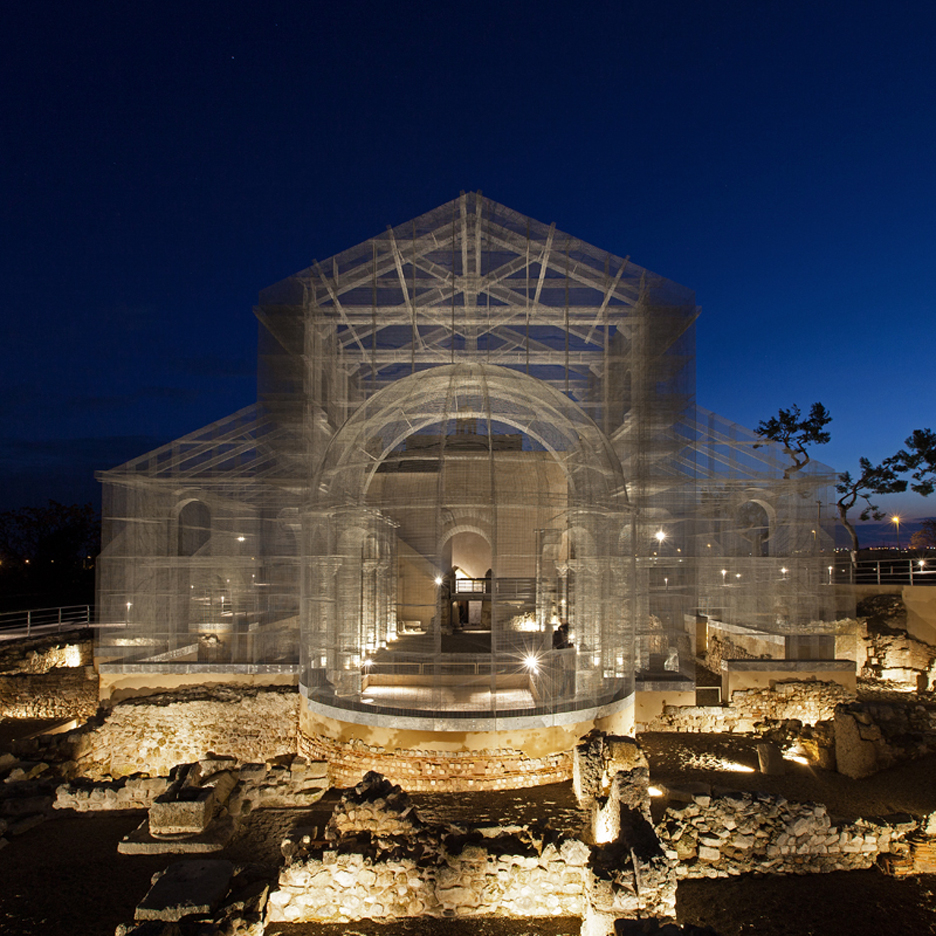 Tresoldi has become well known for his sculptures produced in wire mesh, including a project to recreate an early church in mesh on an archaeological site in southern Italy. He is drawn to the concept of absence represented by the transparent mesh and its relationship to the passing of time.

"[Wire mesh] allows me to conceive an ephemeral spatial narration that holds the context, both from a visual then a conceptual point of view," said the artist.

The viewers are an integral part of the artwork  The artist hopes that the installation will inspire people as they go about their business in the city.

"Limes wants to highlight the role of L'Illa as a public space; its shiny faces overlooking Barcelona are a reflections on the human relationships and the spatial perceptions," explained Tresoldi.

The sculpture will remain in place until 26 January 2019, when it will be re-housed in the interior space.