Featuring both men's and women's apparel, the 3,874-square-foot (360-square-metre) store is located on 40th Street and replaces Christian Louboutin's temporary home, which opened in the same spot in 2009.

The French fashion brand and New York-based design studio 212box chose peeled tree panels to cover the exterior of the two-storey store, giving it a dark and textural appearance that stands out from the surrounding architecture.

Rough textures also continue inside, where paler barks like white birch, gold birch, and pin cherry wood line the walls to provide a softer backdrop to the Louboutin collection.

"The materials chosen for the exterior and interior of this two-storey men and women's retail store, are straight out of nature's library," said 212box founder Eric Clough in a statement.

The Christian Louboutin and 212box teams sourced the siding from Bark House Poplar, as part of an environmentally conscious approach to the project, which is also championed by Miami Design District developer Craig Robins. The panels are harvested by hand to leave the trees in tact, produced using 100 per cent renewable solar-powered electricity, and are fully recyclable.

"We hope that the new Christian Louboutin Flagship building becomes a testament to the sustainability effort in Miami lead by the Design District and Craig Robins," said Clough.

"The materials have softened and enriched a lot of the interior design, allowing the material's natural beauty to resonate," said Clough.

"We tried to keep the use of the materials simple by puzzling various patterns of bark or relentlessly coating entire surfaces to create a new painting of nature as a back drop to the elegant sculptures of each of Christian's shoes."

I-shaped columns originally used for a 1970s Parisian office building are re-used in the shop, to form a dark colonnade around the mezzanine level. This detail is among a number that draw on Louboutin's Parisian heritage – the brand was established in the city in 1992. 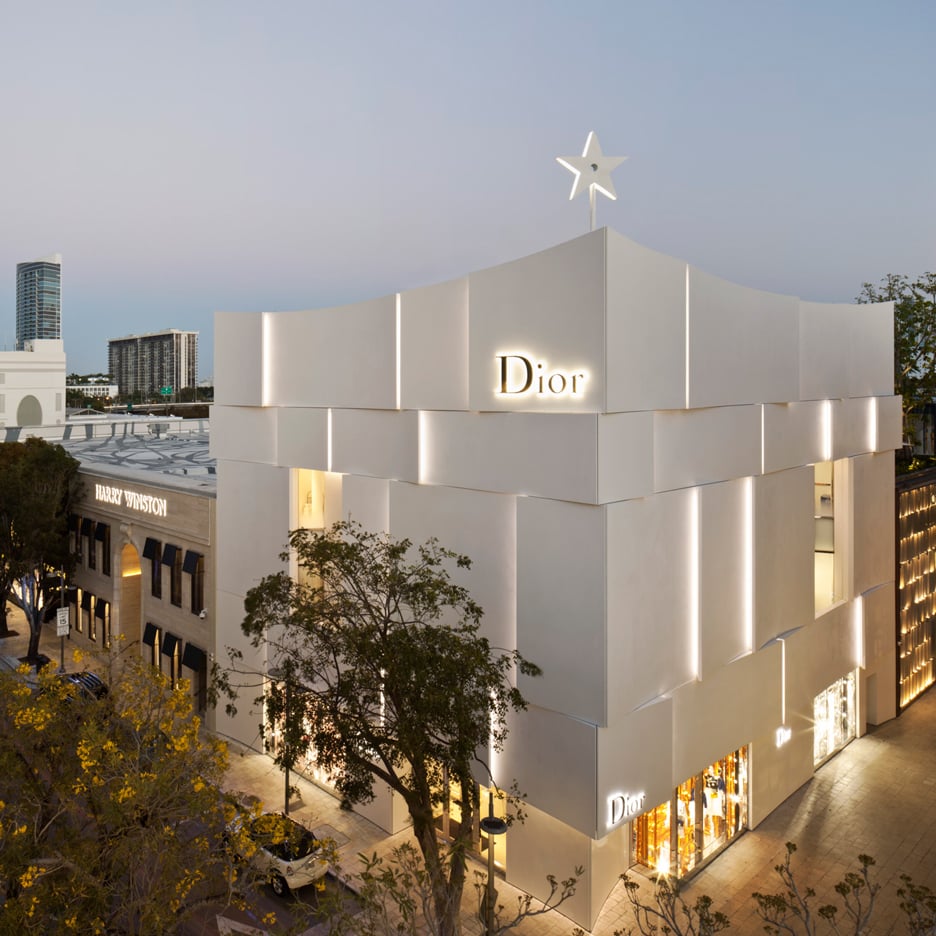 Others include the tiered skylight with a wavy profile that tops the central double-height space, as a reference to Paris' Palace of the Golden Gate, or Musee des Colonies.

"The excitement of this project brought me back to my roots, thinking of this wonderful building in Paris where I first ever saw a sketch of a shoe," said Louboutin in a project statement.

"I wanted to reproduce the ceiling of the 1920s Parisian museum, which will bring this extra light of Miami inside the stones."

Red carpet runs throughout the store to provided continuity between the two levels, and also nods to the famous red-lacquered sole of Louboutin shoes.

Womenswear – including shoes, handbags and leather goods – occupies the ground floor and is accessed from the Paseo alleyway, which was created by the Design District as a shortcut through the main street.

Stilletos are displayed on glass and golden shelves, or within arched nooks, while seats offer places to sit and try on the designs.

A section of this level is also dedicated to Louboutin's new beauty section, which comprises nail varnishes and lipsticks.

The mens' shoe section on the first floor is accessed by a central staircase, with a delicate metallic balustrade, or from a separate entrance off 40th Street.

Christian Louboutin flagship is the latest addition to the Miami Design District, which Robins transformed from a formerly neglected area into the hub for design boutiques, luxury fashion brands and art galleries.

"Christian Louboutin's unique artistic touch is a crucial part of what enhances the overall experience of visiting the Miami Design District," said Robins.

"Once again, as he did in 2009 when he was one of the first brands to discover our neighbourhood, he has added yet another distinctive creative statement to the Miami Design District with this new flagship store."

Other fashion brands that have made an architectural statement in the area include Dior, which has a boutique sheathed in curved white concrete panels, and Tom Ford, which is houses in a pleated concrete shop designed by Aranda\Lasch.