Despite decayed masonry and worn concrete, Mexico City's mid-century university campus is still abuzz with student life according to photographer Yueqi Jazzy Li, who has documented the UNESCO World Heritage-listed site in this set of photos.

Li took the photos of The Central University City Campus of the Universidad Nacional Autónoma de México (UNAM) during a holiday in the capital towards the end of last year.

Completed in 1954 to the south of the city centre, the complex was built to replace an old campus that sprawled across Mexico City. The new design consolidated the educational facilities into a dense site, comprising faculty buildings, the Cultural Center, an ecological reserve, museums, the Central Library and the Olympic Stadium.

A number of Mexican architects, including Mario Pani and Enrique del Moral, contributed to the project – following the modernist architecture style popular at the time. With structures still in tact today, the site is celebrated as a significant example of 20th-century modernism, and was recognised as a UNESCO World Heritage Site in 2007.

"Walking around the campus designed nearly 70 years ago at the height of modernism architecture is like seeing the best ideals of this architectural movement unfold in front your very eyes – abstract yet humanistic, geometrically bold yet woven with nature – a total sense of openness, permeability, and interconnectivity," Li told Dezeen.

He was surprised to find the weathered complex surprisingly relevant in function today: "It was really surreal to experience this total environment built to modernist ideals and alive with lots of students and activities".

"Although almost all of the buildings bear marks of their time – single pane glass, decaying masonry walls, and stained concrete pilotis – the spaces both indoor and outdoor seem to work just as they were envisioned," the New York-based photographer continued.

"Students do all sorts of things – in the open courtyards, under the pavilions and walkways, around the many in between spaces – eating, playing, making out, debating, and protesting."

The photographer toured the school's institutional buildings, student cafes, as well as patios, gardens and footpaths, with a Canon DSLR camera with a 16-millimetre lens.

"It was particularly important for me to expose the rigour of this haven of modernist buildings – spatial parallels, alignments, and centring," he said.

One of Li's main aims was to capture the way that the modernist structures sit within their lush surroundings and landscape design.

"The indigenous planting helps soften such rigorous volumes of spaces," he said. "As a result, the geometric abstraction of the architecture is perfectly married to the figures in nature, giving the campus a fresh sense of space and humanity – a quality that is oftentimes missing in pure modernist works."

"The overarching grid of grass and cement form the outdoor carpet for the centre of the campus," Li added. "Together with generous stairs and garden walls, this grid beautifully negotiates the changing levels and the undulating terrain." 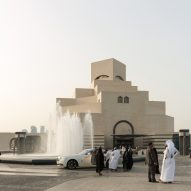 Many of his photos also capture the local lava rock walls and paving stones, which offer character and continuity. The use of the rock also pays tribute to the history of the site, in a solidified lava bed in Coyoacán.

For Li, these elements far outweighed the campus' famed Central Library, which architect and artist Juan O'Gorman designed and covered in a huge colourful mural based on Aztec influences. "The UNAM campus south of Mexico City is so much more than its famous O'Gorman murals," he said.

The photographer's observations align with those highlighted by UNESCO, which lauded University City as "an outstanding example of the application of the principles of 20th-century modernism merged with features stemming from pre-Hispanic Mexican tradition".

Today, the Central University City Campus of UNAM is regarded as its own region in the city, and attracts many visitors like Li. Its facilities include the School of Architecture, which counts some of Mexico's best-known architects, like Gabriela Carillo and the late Ricardo Legorreta, among its alumni.