London fashion designer Samuel Ross looked to the global migrant crisis when designing this utilitarian collection for his brand A Cold Wall.

Presented in a dark warehouse space at The Old Truman Brewery during London Fashion Week Men's, cement-dusted models walked across a black runway, wedged between two tanks of water, meant to represent the passage of water travelled by migrants.

In the middle of the catwalk was a giant, reflective installation where performance artists – covered in black paint – congregated from the tanks, only to be "deterred" by a barking doberman.

"It speaks to the colour and temperature of the era into which we have marched. It is the wake of political turmoil and the global migrant crisis," said the brand.

"In these uncertain time, it's not just about the classic ideas of protection and utility – self-preservation is key to survival," read the show notes.

To highlight the theme of self-preservation, Ross put an emphasis on hard-wearing and armoured materials. One look featured a deconstructed bodice made of welded steel, jesmonite and angular pieces of PVC. 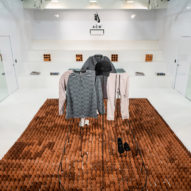 Strategically-placed pockets, both hidden within seams and positioned across key points on the torso, were built into the garments to highlight functionality.

"Pockets are concealed within seams that travel unconventional routes around the garment mapping out the close relationship between the body, organ positioning and garment functionality," said the brand.

Ross also looked to the idea of global connection, both digitally and geographically, ranging from graphics that reference geo-maps to pixelated prints of pebbledash buildings and CGI images.

According to the brand, colours were chosen to reflect those used in geothermal maps, where colours are used to indicate a number of variables like temperature, population or economy.

The show also featured pieces from Ross' recent capsule collection with Nike, which was unveiled in London against a landscape of 4,000 tiny terracotta pyramids last year, and a new denim collaboration with Diesel.

London-born menswear designer Ross founded A Cold Wall in 2017. Having designed clothes for the likes of Virgil Abloh and Kanye West, he is hailed as one of fashion's emerging new talents.