New York firm New Practice Studio has designed a Chinese restaurant in Manhattan with natural hues and quirky illustrations on the walls by artist Qiu Anxiong.

Atlas Kitchen, on the Upper West Side, occupies 3,000 square feet (279 square metres) of an overhauled space behind an existing storefront.

New Practice Studio divided the restaurant into a main dining room, a communal area, a kitchen and a private nook. The eatery features cream walls, a light wood ceiling, pops of teal, and grey tile floors with a white geometric design.

A large, L-shaped upholstered bench is positioned against two of the walls, softened using light grey cushions. The fixed seating is accompanied by small white marble tables, alongside grey metal chairs and seats in light or dark brown.

At the centre of the room are two other couch-like arrangements, with backs that touch. Their dark wood frames have light grey cushions, with similar chairs and tables to create a unified interior.

In the communal area is a golden etching on the wall and a steel overhang filled with greenery. Other sections have vases and a handful of delicate, shiny light fixtures to soften the restaurant.

In the rear is a private dining room, tucked behind curtains and located one step up from the main area. A curved wall is covered in navy tiles and carved with geometric beige lines reminiscent of a mountain range.

The hints of blue, brown, and grey throughout Atlas Kitchen are a historical reference to ancient Chinese maps, which typically feature natural colours in a desaturated state. 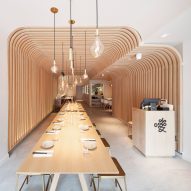 A focal point of the restaurant is the delicate wall illustrations by artist Qiu Anxiong, based on Chinese ink wash on plaster. Qiu's drawings combine mythic Chinese texts with contemporary designs that merge ancient and modern; Eastern and Western.

Examples include hybrids like submarine whales and bat airplanes, with another drawing combining New York skyscrapers and Dubai's Burj Khalifa with the Zhangjiajie's stone pillars in northwest China.

"Qiu takes inspiration from the mythical tales of the earliest Chinese civilisation to explore contemporary China's relationship with modernity," said a project description.

The drawings, and restaurant design overall, reference of one of China's oldest myths: The Classics of Mountains and Seas (Shan Hai Jing). The text describes over 550 mountains and 300 channels, interlaced with tales from Chinese mythology.

In addition to the mural, Qiu will also create two paintings for Atlas Kitchen every year. Depicting this year's culinary themes are drawings of a "lobster motorcycle" and a "pork knuckle vacuum".

Atlas Kitchen was a collaborative effort among New Practice Studio, Qiu, and the restaurant's two owners, Haocheng Sun and Dong Chen. The entire restaurant draws inspiration from this ancient text, and the menu showcases flavours from China’s eight regions.

Photography is by Qingshan Wang. 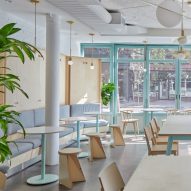