The local architecture practice designed the interiors for The Tang – which serves up dishes from Sichuan, Hunan, and Beijing – around a fusion of East and West.

"Similar to the boundaryless menu, the interior also tries to achieve a balanced sense of Eastern and Western influence," said New Practice Studio, which has offices in Manhattan and Shanghai.

The restaurant has a textured and dark decor featuring black plaster, wood and steel. Red brickwork provides cues to the aesthetic of the alleys in Beijing.

"The interior is upgraded to a refined and moody one," the studio said.

"The Tang is coated in a dark and crimson palette, using materials such as weathering steel for the storefront, walnut wood for countertop, and red herringbone bricks for the wall and floor."

Paintings of Chinese women with cherry blossom trees round out the interior design, with colourful pastel tones that contrast the dark interiors.

"The space showcases a pair of facing mural artworks framed in Chinese Garden-style shapes, which is backlit with a classic neon sign that reads, The Tang," said the studio.

The Tang is located in a long and slender 1,100-square-foot (102-square-metre) space in New York's Upper West Side and can accommodate up to 50 people. 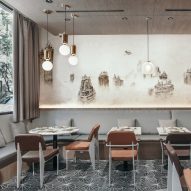 The kitchen is left open to diners and is wrapped by a dark wooden counter and seating.

"The centrepiece is the open kitchen surrounded by counter seating where guests can watch the chefs in action and enjoy relaxing conversations with friends," the studio said.

A built-in seating booth runs along the longer wall opposite, while additional seating is also located in the rear. There are also hightop tables with stools at the entrance.

Upon entering are two floor-to-ceiling glass walls that frame the door, offering the only source of natural light for the restaurant.

New Practice Studio was established by architect Nianlai Zhong. In addition to this restaurant, it has completed several other Asian eateries in New York City, including Hunan Slurp in the East Village and the Upper West Side's Atlas Kitchen.

Photography is by The Tang.