Italian architect Piero Lissoni has used his first year as the art director of Sanlorenzo to rebrand the luxury superyacht company, create its lounges for boat shows, and design a pared-back booth at Art Basel Miami Beach.

Lissoni's booth for Sanlorenzo at the Art Basel collectors' lounge last month was representative of the minimal style he has brought to the 60-year-old Italian shipbuilders since he was appointed to the role in 2018.

The architect began working with Sanlorenzo when he designed interiors for its SX-76 and SX-88 models the year before. For these boats, he took a similar approach to his furniture, interior and building project – using simple forms and a strict set of materials.

Lissoni was then asked to overhaul and update the brand's overall image, from marketing materials to pop-up spaces at international boating shows.

"[Sanlorenzo] are very good in engineering and the production of bespoke boats that are produced one by one exactly for the customer," he told Dezeen. "But the idea is to combine together design, architecture, communication and art."

His tasks so far have included an exhibition and event production for the celebration of Sanlorenzo's 60th anniversary last year, which took place at one of the company's shipyards. 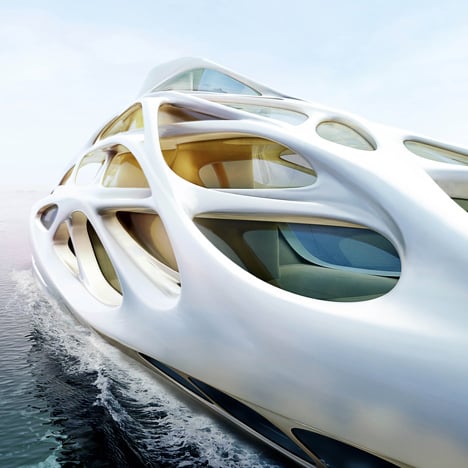 Superyachts by Zaha Hadid for Blohm+Voss

The same metallic maquettes featured in Sanlorenzo's booths in the lounges at the Art Basel fairs in Switzerland, Hong Kong and most recently Miami.

Lissoni explained that the brand's presence at these events is due to the overlap of clientele.

"It's a special crossover, because in the end a lot of owners of these beautiful toys are collectors," he said. "It's not enough to talk about design, I like the idea of [the brand] being well connected with art."

Each of the booths was based on the work of an Italian artist from the mid-20th century. In Miami, the chosen subject was painter Alberto Biasi, a pioneer of kinetic and optical-illusion art.

"Each time we choose a different artist," Lissoni said. "And more or less every time I decide to choose an Italian one, because I'm interested to show this type of sophisticated Italian artist from the 1960s, 70s and 80s."

Biasi's circle-themed artworks were applied to the walls of the otherwise stark white booth, creating a point of visual intrigue for passersby to stop in and learn more about the yachts.

Sanlorenzo was founded in 1958, when its shipyard in Tuscany began building boats for private clients. It now operates three locations along the Italian coast, where custom superyachts are crafted on a made-to-order basis for only 45 customers per year.

"We try to make them very clean, very pure," said Lissoni. "They are, in the end, toys."