Japanese architect Yo Shimada of Tato Architects has designed a table intended to be made at home by consumers using standard materials bought from any DIY store.

The table is not available to buy assembled. Instead customers need to make it themselves using a set of instructions published in a book sold by Hornbach.

All of the necessary materials to build the table are available to buy from the store and should cost no more than 150 euros. The simple materials are also readily available from other hardware shops.

The Utsuri table is a multifunctional design that Shimada created as a storage solution for small living spaces. Mounted on dowel legs and set at various different levels, the table's three white-painted birch plywood tops are the shape of multiple overlaid squares.

The result is a cluster of three interconnecting tables that can be rotated around their shared legs to create different configurations.

The table tops also feature neon spray-painted undersides that create a warm glow of colour onto the white table surface below - the intensity of the glow varies depending on the time of day.

Shimada said that the concept is inspired by the Japanese chabudai table – a traditional low-lying table with four collapsible legs that is set up in the middle of a tatami room.

"During the day, the table is set up, and at night futons for sleeping on take its place. The chabudai transforms the neutral room into a dining, tea, or work room according to the occupant's needs – the table determines the function of the room."

In the same way, Shimada's Utsuri table can be adjusted in terms of its shape and width according to its context and the occasion.

The designer also explained that the table tops' neon-sprayed undersides were inspired by the way that the neon signs in the Japanese city of Kobe are reflected on wet streets. 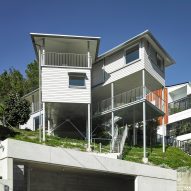 Hornbach's book, which also documents Shimada's design process in both Japan and Germany, was launched in Germany at the end of last week. There are plans for the book to be released in Switzerland, Sweden, the Czech Republic and Slovakia.

The Utsuri table is Hornbach's second DIY design edition in collaboration with an architect. The first was a DIY lounge chair by Berlin-based Danish architect and furniture designer Sigurd Larsen, which was debuted in early 2018 and was also created using only basic materials from the store.

Last year, Shimada created a house in Osaka that was selected as one of Dezeen's top ten houses of the year for 2018.

Designed by his firm Tato Architects, the house's interior was created as a single room containing angular platforms that perform multiple functions and are connected by a spiralling sequence of wooden steps.