Designer Philippe Malouin looked to wooden-slatted barrels for the bases of the furniture in the Barrel collection, his second for British furniture brand SCP.

The four piece collection includes a dining table, a low coffee table, a bench and a stool that doubles up as a side table. Each item is made in Leiria, Portugal, using American white oak, with a lacquered finish.

The collection was launched in Paris at the Maison&Objet design and furniture fair, which Dezeen is media partner for.

The pieces feature laminated wooden slab tops, with bases formed from thin planks of wood, vertically aligned side-by-side in a circle, to resemble the shape of a barrel.

"The immediate inspiration for the table inevitably comes from oak wine or whiskey barrels that were used to make tables when the barrels were discarded," explained Malouin to Dezeen.

The idea to collaborate on a collection of substantial wooden furniture was sparked by SCP founder Sheridan Coakley, who shares a similar aesthetic with the designer: "Sheridan and I tend to agree aesthetically on most things," said Malouin.

For his part, Malouin wanted to make a wooden table that would improve with use and age. SCP describes the result as "a simple yet sturdy, brutalist home object".

"I wanted to make a solid wood table, as I wanted it to be able to age, get scuffed with time, and be kept for a long time," explained Malouin. 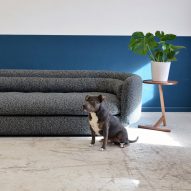 Finding the correct balance of aesthetic and function was a challenge. The designs were reworked many times before they settled on these forms that are intended to work in both a classic and modern interior.

Also designed by Malouin, the Group collection for SCP was unveiled in New York at the ICFF furniture fair in 2017 and shown at Clerkenwell Design Week.

Malouin told Dezeen at the time that the Group sofa was intended for the user to "slouch on rather than sitting up straight", while the chair with a swivel base was "destined for public areas such as clubs and lounges".