Argentinian architect Luciano Kruk has created a family home that follows Mies van Der Rohe's "conception of architecture as the expression of structure".

Casa BLQ is located in Nuevo Quilmes, a gated community in Buenos Aires with relatively small plots of land. Designed by local architect Luciano Kruk, the home sits on a flat, irregularly shaped property that faces a neighbourhood street.

"Originally free of vegetation, the lot is an irregular quadrangular polygon, with a diagonal line parallel to the street cutting its front," said Kruk's studio in a project description.

The clients – a couple with two children – requested a master suite with a dressing room, two secondary bedrooms and a work studio for the father. They also wanted a large outdoor terrace equipped with a barbecue grill. The clients asked that the front of the home offer a heightened level of privacy.

"Special emphasis was put on the fact that the house should be sheltered from the street and look out for intimacy in the private areas," the team said. 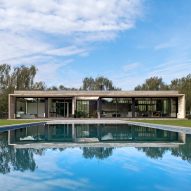 The architects conceived a single, concrete mass that stretches the width of the site. The front elevation is largely opaque, while the backside of the 200-square-metre house is more transparent. The team incorporated glass walls that overlook a verdant yard.

In the rear, the upper level cantilevers over the lower portion, partially shading a terrace. This "eave" helps with the transition from inside to outside.

"It graduates the passage from one sector to the other – at once protecting the inside from the outside weather and allowing social activities in a sheltered outdoor space," the studio said.

Up above, large concrete fins help block sunlight from the west. This back of the home also has a concrete grill, with a black chimney that rises high above the roof.

Concrete not only defines the exterior, but is also prevalent inside. On both the ground and upper level, two continuous, parallel concrete beams stretch the length of the building and support floor slabs. In addition to providing structural support, the home's concrete skeleton acts as a "space organiser" – influenced by the work of modernist German-American architect Ludwig Mies van der Rohe.

"The use of concrete made it possible to organise, expand, fluidify, free and open the space, as well as link it with its surroundings," said the studio. "Following Mies's conception of architecture as the expression of structure, the house's supporting skeleton and its spatiality were integrated into formal unity."

On the ground level, a kitchen occupies one end and the studio occupies the other. The central area encompasses an open-plan living room and dining area. The second floor houses the master suite and bedrooms – all of which are "endowed with openings toward the sky and the garden".

Luciano Kruk founded his eponymous studio in 2012 after a long period serving as partner at BAKarquitectos. He has designed a number of concrete homes in Argentina, including the Equestrian House along the coast and the Rodriguez House on the outskirts of Buenos Aires. 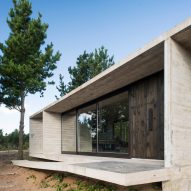