Studio Tack looked to minimalism and a modernist palette during the wall-to-wall revamp of the historic building.

Originally built in 1928 as the Linden Hotel, the property was later renamed Hotel Mark Twain during the Great Depression. The building gained infamy as the location of legendary blues singer Billie Holiday's arrest for opium possession.

In 2017, the building experienced a third incarnation into today's Tilden Hotel, named after sculptor Douglas Tilden, who is best known for creating the Ball Player in Golden State Park.

"Deeply rooted in Japan, wabi-sabi design conveys a certain feeling, look or perspective," said a statement from the hotel. "It focuses on the minimal, celebrates humble materials, and is a natural intersection of the essential, ageing and beautiful."

Guest rooms range from 320 to 450 square feet (30 to 42 square metres), all hinting to the building's art-deco heritage with a monochromatic theme that employs high-gloss black and chrome accents. White plantation-shuttered windows lend a sense of urban zen in the face of the nearby bustle of Union Square. 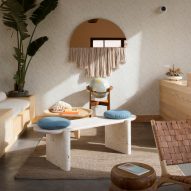 In the lobby, tufted velvet Harvey Projer Sofas serve as the focal point within an airy, white-washed space. Allusions to Northern California's Spanish mission revival architecture are seen in the prominent arches and high ceilings.

Cues to nature extend through a hanging library of watercolour paintings by Jenny Kiker, which feature plants indigenous to the Bay Area. Contributing to the lobby's ambience is a digital art installation by San Francisco-based Daylighted, an online marketplace that enables rotating art displays on a digital canvas.

But The Tilden's embracing of art is not limited to its walls. Through the Tilden Art Committee, the hotel hosts bi-monthly Art Tuesday receptions that spotlight one local artist and their work for eight weeks. All proceeds go straight to the artist, and guests have the opportunity to interact with Tenderloin locals during this free, open-to-the-public event.

Studio Tack has turned several run-down properties into boutique accommodation. An hour north of San Francisco, the studio refreshed a motel to become The Sandman hotel.