Architecture studio Snøhetta is working towards a more circular economy with its latest chair design, which is made from recycled plastic and steel taken from Norwegian fish farming industries.

Snøhetta's S-1500 chair, which features a body made entirely from waste plastic and a subframe made from repurposed steel, was unveiled at Stockholm Design Week.

These firms supply NCP with discarded ﬁsh nets, ropes and pipes left over from their operations, which are processed and ground into a granulate substance that can then be injected into a mould.

"Instead of sourcing virgin plastic from the other side of the world, the ability to get high quality, recycled plastic from the neighbouring businesses created a win-win situation for all," Snøhetta architect Stian Alessandro Ekkernes Rossi told Dezeen.

"Sometimes smart solutions are more accessible than one thinks, when you start asking the right questions."

Despite being made from recycled plastic, the streaked appearance of the chair's matte, dark green surface grants it a likeness to marble.

In addition to allowing the designers to play around with different surface patterns and textures, the technique of injection moulding also eliminates the need for any supplementary work once the chair has been produced.

This method, alongside the irregular plastic compositions, also affords each chair a unique quality, despite being mass produced.

Snøhetta hopes that utilising plastic waste from local businesses will not only contribute to building a circular economy, but will also encourage consumers to see waste as a valuable resource rather than scrap material. 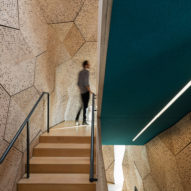 Not using new raw materials in the manufacturing process gives the chair one of the lowest carbon footprints in the market at the moment.

"In order to reduce the need to produce new, virgin plastic, consumers and industry need to acknowledge the value inherent in used plastic and find ways to substitute virgin plastic with recycled material," said Rossi.

"With the development of the S-1500 chair, we hope to inspire people to employ waste material in new and sustainable ways through innovation and design," he continued.

The structural design of the S-1500 chair has been modelled on Norwegian modernist designer Bendt Winge's classic R-48 chair created in the late 1960s – also manufactured by NCP.

Due to the popularity of Winge's R-series chairs – with more than five million units sold in Norway alone – NCP invited Snøhetta to redesign the classic piece with a more streamlined design.

Like Winge's R-48 model, the S-1500 chair is intended for use in public institutions such as schools and offices. However, due to its modern design and eco-friendly background, the designers hope to also see it in people's homes and other, more social, settings.

"The aim has been to understand plastic as a material, its journey and footprint in the value chain, as well as its inherent qualities," said the studio.

"[The S-1500 chair] tells the story of plastic that has been on a journey as fish nets in the North Sea, to the production facilities of NCP and eventually ends up as a chair in a school, a home or a public facility," it added.

The chair is on display during Stockholm Design Week at the city's furniture fair, taking place from 5 to 9 February.

According to the architecture firm, this is just the beginning of many more sustainability projects to come. After recently opening the ultra-efficient HouseZero at Harvard University, the practice is now working on a project called City Cup (or Bykopp) to remove all disposable cups in the Oslo region.