Visuals have been released of the SOM-designed Burj Jumeira, a 550-metre-tall split-volume skyscraper in Dubai that will rise from a lake shaped like the fingerprint of the emirate's ruler.

Unveiled by state-owned Dubai Holding, the supertall skyscraper has been dubbed as the "new icon in Dubai's skyline".

Designed by Skidmore, Owings & Merrill (SOM), it will be located near the city's waterfront opposite the Sheikh Zayed Road and form the centrepiece of the new Downtown Jumeira district, which is also being masterplanned by the architecture studio.

The Burj Jumeira tower's oval-shaped base, which is patterned with Mohammed bin Rashid Al Maktoum's fingerprint, will form the heart of the project. It will be used to host "social, cultural and artistic events and activities".

The mirrored pond will be surrounded by shops, and be complete with water fountains and a terraced outdoor amphitheatre.

The tower will rise from one end of the lake, and comprise two connected, curved volumes that are modelled on desert topography and lined with digital displays.

"Burj Jumeira is bold, elegant, and dynamic," said SOM design partner Mustafa Abadan. "It will tower over Jumeirah as the centrepiece of the neighbourhood, and will feature a synthesised architectural and structural design."

Inside the Burj Jumeira, there will be a number of observation decks, including one that spans its split-volume form three-quarters of the way up. 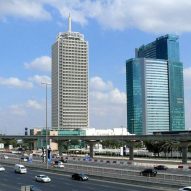 This deck will offer 360-degree panoramic views of Dubai and the opportunity to skydive, and be accessed by lifts that are fitted with interactive and immersive digital screens.

Similar digital screens will be used to line the interiors of the Burj Jumeira's viewing platforms, ensuring they "go beyond the traditional concept of observation decks".

At 450 metres, there will a flexible event space named the Crown. It will connected to a sky-lounge and sky-restaurant, which will enable it to be extended to host larger scale events.

"The tower's facade will be covered with digital displays that can be utilised for various occasions and celebrations, further reinforcing the tower's role at the heart of Dubai's community activities."

The Burj Jumeira will be connected to the Sharaf DG Metro Station by a covered pathway, which will also extend to the iconic Burj Al Arab Jumeirah, a hotel on an artificial island 280 metres from Jumeirah Beach.

Work on the Burj Jumeira began on 31 January, and is expected to reach the first phase of complete in 2023.

The construction of Burj Jumeira follows the completion of 13 skyscrapers in the UAE last year, which made it one of the top three countries to contribute to the 143 buildings over 200 metres high built in 2018.

Of the 143 buildings, 88 were in China – making it a record-breaking year for the country. The United States had the second highest number per country, with 13 new buildings over 200 metres.