Berlin-based artist Claudia Wieser has transformed the ground floor of Bloomberg's European headquarters in London into a Roman Empire-inspired installation that references the site's heritage.

The artist references the Roman Temple of Mithras, which was discovered in 1954 during construction work on the site, now the location of Bloomberg's European headquarters, which was designed by Foster + Partners in 2017.

The exhibition aims to "explore an ever-changing scene where the ancient and the contemporary conflate and collide".

The walls of the space are covered in collaged wallpaper featuring antique statues and film stills from the 1976 BBC television series I, Claudius, set during Roman times.

"I relate to Greek and Roman antiquity because we still refer to it even though it was so long ago. For example, we still regularly perform plays in the theatre that originated 2,500 years ago. They are timeless," she said.

The first sculpture in the exhibition is a large, colourful cube made of ceramic tiles laid in geometric patterns. It is populated by a series of brightly painted wooden objects that resemble Roman vases.

Next to it is a mirrored, black stainless steel cube and a ceramic-tiled throne with copper detailing on its sides. 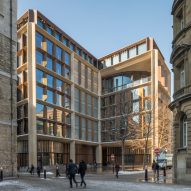 There is also a stainless steel panel on the wall, which is composed of geometric shapes, and two tiled benches that visitors are encouraged to sit on.

The sculptures are juxtaposed with a wall of historic Roman artefacts discovered in the ruins of the Temple of Mithras.

"These specific visual arrangements breathe presence and timelessness, prompting the viewer to take a dedicated position within the staged situation – both reflecting on the past and fixed in a narrative that only exists in the very moment one enters the space," said Bloomberg.

"This juxtaposition of modern and antique characters draws on Wieser's exploration of the enduring conditions of human nature – where age-old questions of culture, power, love and family seem relatively unchanged in the city of London as we see it today," Bloomberg continued.

Claudia Wieser's Shift is on show at Bloomberg Space between 31 January and 13 July 2019.