Over 20 years after artist and sculptor Anish Kapoor moved into an old dairy factory in south London, Caseyfierro Architects has transformed the entire street block into a series of studios, workshops and galleries (+ slideshow).

It took architects Michael Casey and Victoria Fierro five years to renovate the buildings without disturbing the day-to-day workings of Kapoor, whose most-famous works include the bean-shaped sculpture in Chicago's Millennium Park.

"Individual spaces have differing atmospheres," he added. "Each has a bias towards a specific method or material, and sophistication of the method used to create the work."

The architects started with the northern end of the street, converting the old dairy building into three studio spaces. The first of these is highlighted from the street by the presence of a huge new clerestory window.

Inside, the removal of the original first floor made it possible to create a nine-metre-high space, extending all the way up from ground level to the roof.

The north-facing clerestory window helps to bring diffused light into this space from overhead, and original ground-floor windows have been infilled with brickwork to match the walls.

The other two studios both feature spacious workspaces on the ground floor, while the floors above contains smaller-scale rooms for painting and drawing. A new mezzanine office was also added inside one.

"The architectural interventions provide an internal world free from external distraction, maintaining a discrete presence on the street," said Casey.

"The collage of brickwork on the redundant diary building reflects the history of the site through textures and colours." 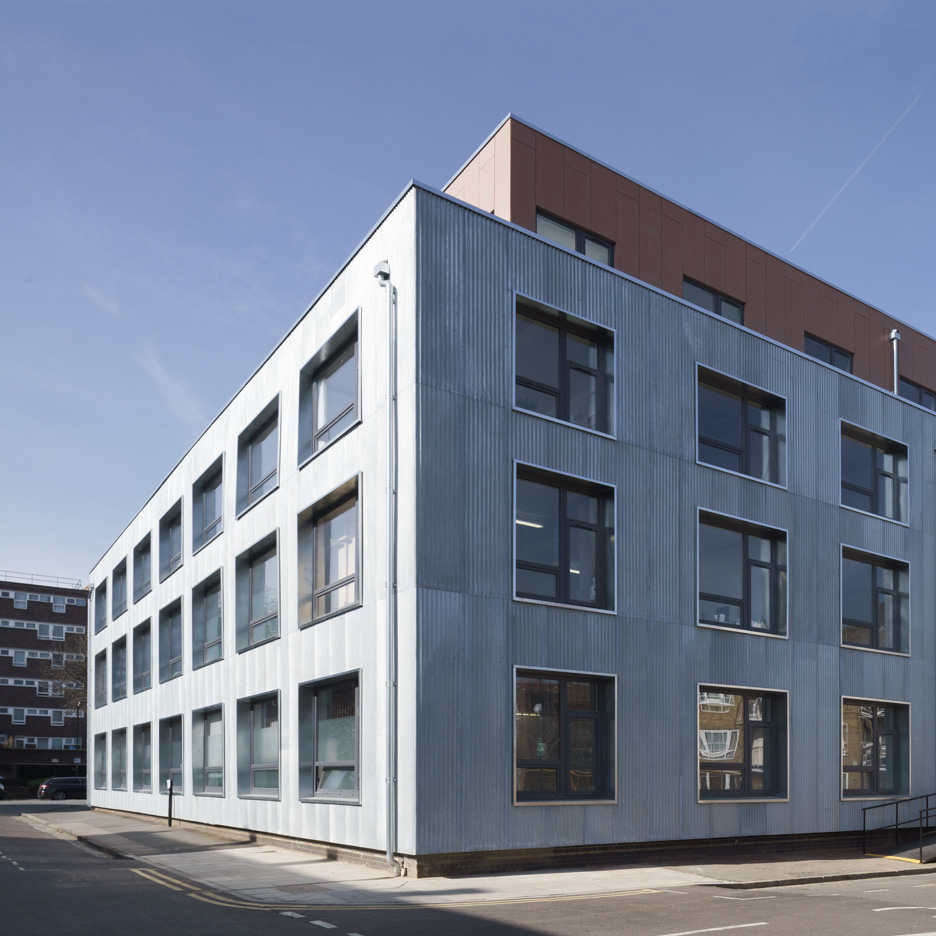 Some original windows were retained here, while others were filled in or moved elsewhere. But all of the new windows were carefully oriented towards the best views.

The second phase of the project involved creating a series of smaller studios at the southern end of the street. The most important of these is a 7.5-metre-high space with an exposed steel I-beam structure.

Following Kapoor's brief, each beam can support a suspended weight of up to three tonnes. Combined, the structure can carry even greater loads, so large sculptures can easily be hung overhead.

Other spaces in these three studios include a mezzanine for laying out maquettes, a gallery-like space for testing exhibition environments, and an administration area and an enclosed outdoor yard.

Throughout the six studios, areas of the original brick, paint and plasterwork have been left untouched as traces of history. In some spaces, they are complemented by drawings made on the walls by Kapoor.

"Anish told us not to create galleries spaces – the typology both precious and oppressive to any creative process," explained Casey. "The artist typically marks walls, scribe works into surfaces or paints directly over the face of his thoughts, so making perfect finished spaces would hinder that freedom."

Fluorescent tubes were installed throughout, providing even lighting at a level of 700 lux throughout.

Kapoor was born in Mumbai in 1954, but has lived and worked in London since the early 1970s. He has become one of the UK's best-known artists, and was awarded the prestigious Turner Prize in 1991.

He teamed up with engineer Cecil Balmond on the controversial ArcelorMittal Orbit, and created womb-like orbs inside Paris' Grand Palais in 2011. He also collaborated with architect Arata Isozaki on an inflatable mobile concert hall that toured earthquake-affected regions of Japan.

Other London artists with architect-designed studios include Antony Gormley, who has a galvanised steel workshop by Carmody Groarke, and ceramic artist Edmund de Waal, who occupies a space renovated by DSDHA.