They are intended to be wrapped around furniture to protect it during a move or when travelling.

Each blanket features a repeated pattern of pixelated birds in flight, bordered by the words "moving to Canada", the artist's name and the year the piece was made, printed in a digitised font.

Each piece is also accompanied by a certificate of authenticity that has been numbered and signed by the artist.

Pruitt uses the quilts as a way of commenting on the topic of migration, from a literal point of view in terms of moving furniture from one place to another, but also from an anthropological standpoint.

"In the natural world, species of all types migrate seasonally to find safety and comfort, whilst similarly, humans migrate to escape from tyranny and autocracy, or more simply relocate with the hope of finding a better life," explained Pruitt. 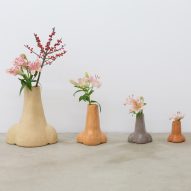 He collected old moving blankets, which are typically sewn together from scraps of industrial textiles, and overlaid these factory-made blankets with pixelated silk-screen prints of migratory geese that he developed in photoshop.

While these designs reference digital pixelation, they also allude to the traditional quilting squares used by textile makers to build the bones of patchwork fabrics.

Exhibited as part of this year's Nomad collectible design fair in St Moritz, the blankets were displayed around the edge of a plinth at the centre of the room, which housed a series of touch-screen tablets to allow visitors to scroll through the Yoox website.

According to curator Beatrice Trussardi, she wanted to create a "virtual gallery" that would relay the fact that the blankets can only be purchased online.

Just as visitors could buy furniture pieces from other galleries at the fair, they could also purchase Pruitt's quilts straight away via the Yoox website on these tablets.

However as Trussardi explained, the blankets also have a deeper meaning that is rooted in American history, particularly in the mid-19th-century during the slave trade.

During this time there was a network of secret routes and safe houses in America known as the "underground railroad", used by black slaves to escape into free states such as Canada.

It is believed that allies used quilts to communicate information to the slaves about how to escape to freedom, sewing special messages in code into the blankets.

"I like to make a point of making art that is accessible," said the artist. "I wanted [the blankets] to be something domestic and potentially functional."

According to the curator, the blankets also hint towards a current political context. During the 2016 presidential campaign, various Clinton supporters were seen sharing their thoughts across social media that, if Trump were to win, they would "move to Canada" – these words are printed around the outside of each quilt.

"[Pruitt] is an artist who is not afraid to confront the reality that surrounds him, even when it is uncomfortable or difficult," said Trussardi. "He is able to undermine what is common place and taboo with ironic gestures that hide depth of analysis and thought."

"The unique artworks he created for Yoox represent a witty commentary on the complexity of migration, yesterday and today," she added.

"Not multiples but forty unique pieces, each different from the other, that are as unique and individual as the stories of the people who find themselves having to leave their homeland for a new place, with their load of fears and expectations for the future."

The Migration Moving Blanket series was debuted online on 7 February to coincide with Nomad, where the works were showcased for the first time.

German design studio BNAG also exhibited their designs at the St Moritz fair, which drew to a close yesterday. The duo displayed a series of ceramics in the shape of different body parts including ears, hands and feet, in a bid to address negative body image.