German design studio BNAG encourages us to celebrate our flaws with a collection of lumpy nose vases and pink nipple clocks, exhibited as part of this year's Nomad collectible design fair.

The ceramic series, called Body Buddies, comprises a series of unique platters, vessels and lamps crafted in the shape of different body parts including ears, hands and feet, that are designed to address negative body image.

Also featured in the collection is a giant toe that doubles up as an iPhone docking station, and a terracotta clock with nipples in place of numbers.

Oliver-Selim Boualam and Lukas Marstaller, who make up BNAG studio, designed the collection as a tongue-in-cheek way of prompting people to change their perspective about the body parts they often consider undesirable.

Each piece boasts the natural irregularities that come from the process of hand-crafting, encouraging people to in turn embrace their own flaws.

The duo also set out to celebrate diversity, glazing the ceramics in a variety of different skin-like tones.

"The idea behind all the objects we're showing at Nomad is quite democratic," BNAG told Dezeen. "We're trying to explore the possibilities of figurative sculpture and engage the user through touch and emotion."

"Each piece is handcrafted by us and acts as a tribute to the beauty and diversity of the human body," the duo added.

Represented by the Berlin-based Functional Art Gallery, BNAG's Body Buddies is on show at this year’s Nomad collectible design fair in St Moritz, which takes place from 7 to 11 February at Chesa Planta, a 16th-century Swiss mansion.

The collection was initially designed for a hospital art program, to brighten up the patients' rooms with playful objects, but soon developed into a larger project as collectible design. 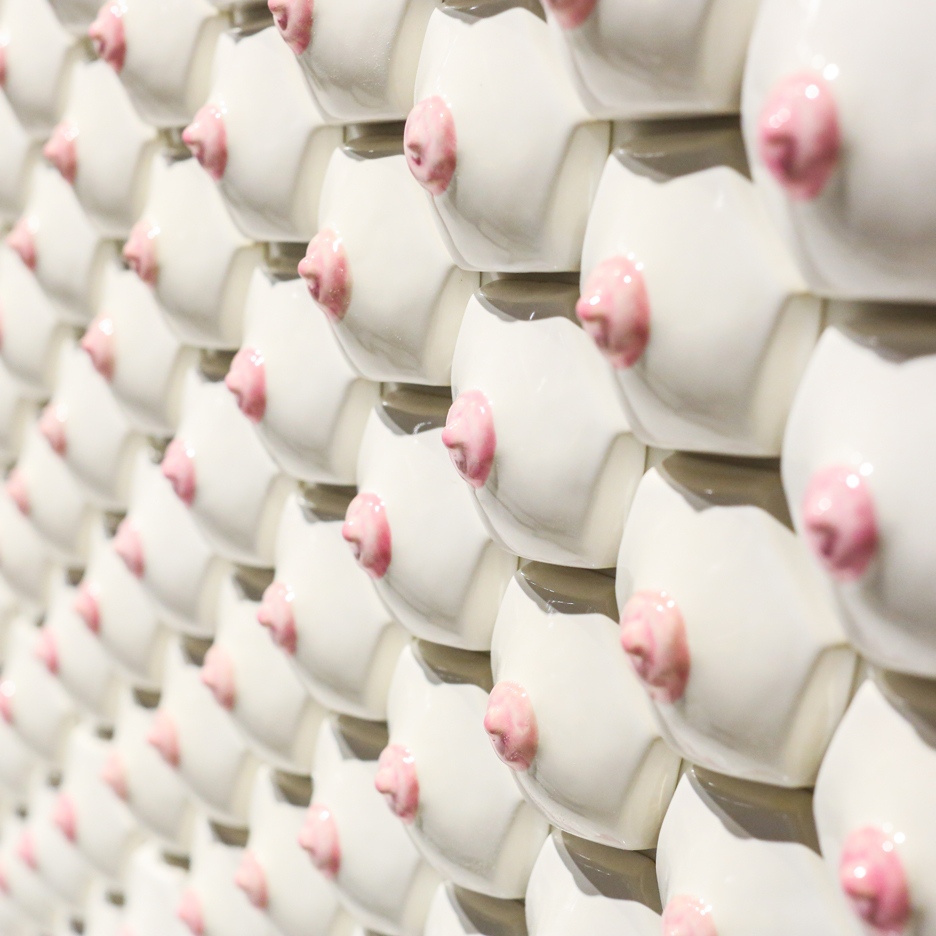 Nicole Nadeau's nipple tiles are moulded from her own breast

"These ceramics are not just ceramics," said Benoît Wolfrom and Javier Peres from Functional Art Gallery. "The concept behind them is so interesting, especially in a region like this where there are so many people with plastic parts all over their bodies."

"Some of the ceramics are bumpy and rugged, some are cracked, because we all have scars and things that we wish were different, but it's all about embracing and celebrating those parts of your body, and putting them on display in a domestic environment," they added.

Boualam and Marstaller also took inspiration from the 20th-century surrealist art movement, including works by artists such as Salvador Dail and Pablo Picasso, and their unusual or distorted use of the body in particular.

The duo consider their ceramics as pieces of art that, when placed in the domestic space, are transformed into functional objects such as vases, bowls and clocks. "The art gets functional and the function gets artistic," they explained.

"A lot of the designers we work with, including BNAG, want to translate the artful concept of their work through the medium of a functional object," Wolfrom and Peres told Dezeen.

"They are challenging the notion that the function kills the artistry of the product, and that if you can use it then it's not art," they continued. "These two elements are not mutually exclusive."

Body Buddies is being displayed at the second edition of Nomad collectable design fair in St Moritz, for which Dezeen is media partner.

Functional Art Gallery is one of more than 20 galleries exhibiting at the fair, including London's Gallery Fumi, Milan-based Nilufar gallery and David Gill gallery.

BNAG isn't the first studio to look to breasts in the design of functional objects. American artist Nicole Nadeau used a mould of her own breast to create hexagonal ceramic tiles complete with a pink nipple at the centre.