Residents of the Neo Bankside housing have had their claim that Tate Modern's Herzog & de Meuron-designed extension invades their privacy dismissed by the high court.

Five claimants went to the high court to argue that the privacy of their homes in the Rogers Stirck Harbour + Partners-designed apartment blocks on London's South Bank, were being intruded upon by the  Switch House's viewing gallery.

The case has been thrown out by a high court judge, who suggested that the residents could take measures to protect their own privacy, including installing net curtains.

The claimants pushed for the gallery to erect screens or cordon off part of the viewing platform entirely, but Mr Justice Mann passed judgement that dismissed their claim of privacy and of nuisance. An application from the claimants to appeal the judge's decision has also been dismissed. 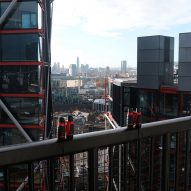 In his judgement Man suggested that the residents, not the gallery, could make alterations. "[It is] plain that some remedial steps could be taken, the owners could lower their solar blinds," reported the Independent. "[Or they] could install privacy film (or) net curtains."

This mirrors the opinion of Tate Modern former galleries director Nicholas Serota, who oversaw the Tate Modern's launch in 2000 and its subsequent £260 million extension, who previously suggested the homeowners could simply put up net curtains to deter unwanted intrusion.

Herzog & de Meuron's Switch House, which opened in June 2016, sits to one side of the former coal power station the Basel-based practice converted into the Tate Modern.

An outdoor public viewing balcony runs along the exterior of the extensions tenth floor, giving visitors to the art gallery views over London's skyline and into the neighbouring flats.

Residents of Neo Bankside, which was completed in 2013 and has a fully glazed facade, accused visitors to the Tate Modern of spying soon after Switch House opened. Tate Modern refused to close the platform and suggested the owners of the apartments invest in curtains or blinds. The residents responded by lodging a complaint with the High Court in 2017.

Following the verdict Tate released a statement that praised the judge's decision.

"The Level 10 Viewing Platform is an important part of Tate Modern's public offer and we are pleased it will remain available to our visitors," said the statement.

"We continue to be mindful of the amenity of our neighbours and the role Tate Modern has to play in the local community. We are grateful to Mr Justice Mann for his careful consideration of this matter."

Last year artist Max Siedentopf installed binoculars at the Tate Modern, in response to the court case, which allowed visitors to the art gallery to look directly into the Neo Bankside development.

Main image is by Jim Stephenson.