The TWA Hotel will officially open 15 May 2019 inside JFK's former TWA terminal, which has undergone a major overhaul after being shut for 16 years, but prospective guests can already book rooms.

The mid-century-modern structure was completed by Saarinen in 1962 for Trans World Airlines – a major American airline that operated from 1930 until 2001. Formerly known as TWA Flight Center, the building was closed in 2001 as it was unable to support the size of modern aircraft.

The Port Authority of New York and New Jersey (PANYNJ), which operates JFK Airport, hotel owner-operator MCR and developer Morse were also involved in the efforts to revitalise the iconic landmarked building.

It has a notable winged construction with curved, beak-like concrete rooflines and glass curtain walls. Interiors details include a red-coloured lounge with seating built into the floor.

The sunken lounge was restored during the renovation and accompanied by carpet in a Chili Pepper Red hue – the signature colour created for the project by the architect. Other portions of flooring are covered in thousands of penny-round tiles.

The hotel's 512 rooms are housed in two new curved buildings placed behind Saarinen's structure. These have one of the thickest curtain-wall constructions in the world, featuring seven panes in order to block runway noise.

Inside, guest rooms are designed to evoke the history of the original terminal, with elements harking back to 1960s design. 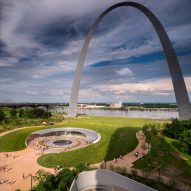 Details include vintage posters from TWA and Saarinen-designed furnishings, which were provided by Knoll. Among the pieces are red, curvy Womb chairs and white Tulip side tables. A custom walnut desk area behind the bed has an armless Executive Chair in tan leather.

Decor in the bathrooms includes bubble lights and terrazzo floors. Other details in the rooms are original branding from the sixties that features on toiletries, notepads, and key cards holders.

There is also a cocktail lounge on the tarmac, which occupies a retrofitted Lockheed Constellation L-1649A Starliner airplane dating back to 1956.

The TWA Flight Center is among the best-known designs by Saarinen, who was born in Finland and emigrated to the United States when he was 13 years old. Others include the Gateway Arch in St Louis, which also recently received a refresh of its subterranean museum.

Located in the New York City borough of Queens, JFK Airport is set to undergo a major overhaul that aims to unite the existing disparate terminal arrangement, improve vehicular access, and expand the mass-transit rail system. Governor Andrew Cuomo revealed the updates to the scheme known as the JFK Vision Plan in October 2018.

Photography is by Max Touhey, unless stated otherwise.