Designers are being invited to design the perfect financial crime of the future, for an annual award that encourages the development of links between the financial and creative industries.

For 2019, The Future of Money Award is asking entrants to submit their ideas for a financial crime which utilises a new loophole, a change in social convention or a specific technological development.

Shortlisted concepts will be judged by a panel of financial experts and industry leaders at the Money20/20 Europe conference in Amsterdam later this year.

The competition is only open to designers who live in Europe. This year's shortlisted entrees will have the opportunity to present their concepts at the conference to an audience of financial experts and industry leaders, where the Grand Prize winner will be chosen.

The organisers hope that the competition will produce thought-provoking ideas that explore the vulnerability of a completely electronic marketplace.

"Crime, whether we like it or not, is a driving force behind a large proportion of technological progress," said the competition organisers.

"In 1817, a burglary at a British dockyard led the government to start a competition, challenging locksmiths to invent an un-pickable lock. The result was the Chubb detector lock, and it remained unpicked for 33 years."

The awards addresses the fact that as technology advances, so too does the manner in which criminals seek to exhort money.

"In the past, adding another lock, or increasing the wall thickness of a safe was the obvious solution to deter theft. However, money is no longer physical, it is now predominantly a data set shared via telecommunications, secured via encryption, transacted via smartphone or exchanged into V-bucks," said the organisers.

"As our money becomes completely electronic, new crimes will undoubtedly be committed, which take advantage of the technology itself or the social conventions on which it rests. Perhaps if we could imagine what crimes might happen, we could start to think about how to prevent them.

"Do not commit a real crime"

Designers have until 5 April to submit a PDF document containing an overview of their future crime concept, complete with illustrations.

Four shortlisted entrants will then be selected to receive €1000 each to develop their idea and produce a short video. The videos and concepts will be presented and judged at Money20/20 Europe, which takes place from 3 to 5 June 2019 in Amsterdam. The Grand Prize winner will receive €3,000. 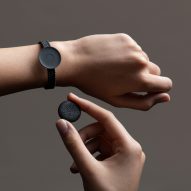 "We invite creative practitioners to employ a speculative design approach and design a future financial crime," states the brief, before warning: "Do not commit a real crime!"

The award highlights the growing interest in cryptocurrency and blockchain.

Last year, Benjamin Hubert's design studio Layer launched Trove, a digital wallet and app system that allow you to store your cryptocurrency without fear of loss or theft, while Tech company Coinmine released its first product designed to allow anyone to mine and manage cryptocurrency.