Pascali Semerdjian's renovation maintains the existing concrete structure of the apartment, contrasting it with new white surfaces, wooden furniture and cabinetry, and brass accents to define the newly configured space.

Among these new details are a set of floor-to-ceiling wooden bookshelves arranged in a U-shape. The owner can store books around its perimeter or on the inside, where there is a reading nook.

"It soon became clear to us that this space should be an architecturally important volume and that it should be the spirit of the project," said Pascali Semerdjian in a project description.

The bookshelf forms the central feature of the apartment, with the areas surrounding including a sunken living room, and an open-plan kitchen and dining room.

A cantilevered wooden bar hangs off one of the existing structural columns, facing the dining room. This creates a place for guests to "sit and gather in a more unpretentious way".

"We tried to separate some volumes like the bar and circular library of the main structure in order to reinforce them as architectonic elements and to work them as indirect lighting sources in the apartment," said Pascali Semerdjian.

Measuring 381.72 square metres, VLP apartment has a production kitchen for hosting large gatherings, a breakfast nook when the occupants wish to dine more casually, and a live-in maid's suite. 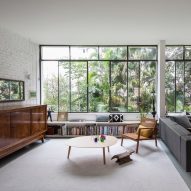 There are also three bedrooms, accessed by a corridor. Two are children's rooms adjoined by a shared play area, while the master suite sits at the end of the hall.

Pascali Semerdjian also designed all of the cabinets and built-in furniture for the residence, including the sideboard, sofa and side tables, and television shelf. Marble side tables, and the bathroom vanities, which appear to be suspended from brass rods, are among other pieces.

Other recently renovated São Paulo apartments include a mid-century residence that was updated for the grandchild of its former owner and a 24 square-metre flat with movable walls.

Pascali Smerdjian Arquitetos was founded in 2010 by Domingos Pascali and Sarkis Smerdjian. The firm's other projects include a brick house in São Paulo punctuated by colourful windows. 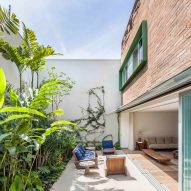