Monolithic concrete columns and walnut panelling create a backdrop for an extensive collection of mid-20th century Brazilian art and design in this 1970s São Paulo apartment renovation by BC Arquitetos.

Located in a 1970s building in the traditional Jardins neighbourhood of São Paulo, the 230-square-metre DN Apartment was created for a landscape architect client.

When designing the space, BC Arquitetos – led by Bruno Carvalho and Camila Avelar – was influenced by the work of Brazilian modernist and landscape architect Roberto Burle Marx.

The layout was guided by the apartment's original faceted concrete columns, which became a feature of the open-plan living room.

"Three main pillars guided the choices for this project, which we classify as a gallery apartment," said BC Arquitetos. "A clean, sensorial and scenographic architecture that facilities the connection between the spaces, using few elements." 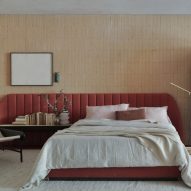 The apartment is furnished with a selection of classic furniture designs by Brazilian masters of the 1950s and 1960s. These include black gold chairs and a Petala table by Jorge Zalzupon, a Janguada armchair by Jean Gillion, mtf600 dining chairs by Geraldo de Barros, a Mole armchair by Sergio Rodrigues and a Verde Corvo sofa by Jader Almeida.

A table by Sergio Rodrigues and its original leather chairs by Jorge Zalzupin feature in the open-plan kitchen and dining room, which can be closed off from the rest of the apartment with a set of folding doors.

Pieces of mid-19th-century furniture, as well as a glass ceiling light by revered Brazilian lighting brand Dominici, were sourced from a local antique dealer.

The interiors also feature a collection of contemporary pieces of art, such as a photograph of São Paulo by Claudio Edinger, a metal sculpture by Claudio Alvarez and a bronze head sculpture by Florian Raiss.

Other art-informed interiors include one by local studio Framework, which used sculptural furniture and French oak panelling to create a family office in Amsterdam designed to convey the "calm ambience of an art gallery."

In London, an art dealer's vault was transformed into a tranquil basement flat by Daab Design.

Photography is by Denilson Machado.