The apartment is located in an ornate townhouse built in 1862 in the Lithuanian capital's old town.

Over its 157-year existence, the formerly grand building and its interiors had become run down having gone through a series of changes of use and different landlords.

Local studio ŠA Atelier said its aim was to "release the interior" from its oppressive past with white-washed walls, natural wood and concrete while retaining some of its original features such as the decorative cornicing, ceiling roses and door frames.

"A new space is created as if it flows through the entire apartment, revealing the prospect of multiplicity and the depth of the premises," said the designers.

"The openings in the old walls are cut in such a way that the new space is adapted to modern family life, but at the same time leaving a mark of the old structure of the plan."

The design studio said it inserted only one new partition, which functions as a white kitchen with a chipboard backsplash on one side and an all-white bathroom on the other.

As well as hiding the pipework and services for these rooms, it also provides storage for larger items located above the kitchen.

Featuring a concrete floor and white walls, the narrow open-plan bathroom was designed as an abstract space where all accessories and functions are built-in.

The sink is located in the recess that was previously a window and the bathroom door is cut with a special opening for the family's pet cat.

"While standing in the shower, through the open door, you can see the entire length of the apartment, at the end of which the view is extended by a mirror," explained the designers.

The apartment is sparsely furnished with chairs, tables and lamps designed and made by ŠA Atelier.

"White is a silent pause that allows you to relax and give a bright, fresh background to home life and creation," said the designers of the apartment's restrained colour and material palette.

"Wood is a natural base under the feet, and has been used in this apartment since it was built. At the same time, we prefer enveloping space with natural materials rather than colours. We try to keep materials as authentic as possible, so that no material should be a pretender."

In the bedroom, a custom-made bed is anchored by a large plywood bedhead that conceals a walk-in wardrobe at the rear of the space, and also features two flaps that fold down to reveal bedside lighting and surfaces that function as bedside tables.

"The implemented project marks a new and bright stage in them whole building's life, along with the young families that are starting up there," added the designers. "The gentrification has just started, but it is developing really slowly in this district." 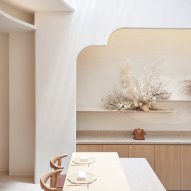