Designers and architects from China are being honoured at international design events this year, as the nation comes of age as a creative powerhouse.

Four key events, three in Europe and one in Canada, have in the first few months of 2019 invited Chinese designers to take a leading role.

Shanghai architects and designers Lyndon Neri and Rossana Hu of Neri&Hu were guests of honour at both Stockholm Furniture Fair in February, and at IDS Toronto the previous month.

Later this month, China will be guest of honour at Design Biennale Saint-Étienne in France, which features a three-part exhibition examining Chinese design.

"Over the last years, the rise of Chinese design has become undeniable," the biennale's programme states. "Far from the stereotype of mass consumption and low-quality products, for China, design is a major lever in economic development today."

Fan Zhe, who is curating the Chinese element of the Biennale, described Chinese design today as "like all kinds of flowers blooming together".

"Chinese designers' learning, adoption and accumulation over a long period of time and through communication with international designers has led to a change in quality this year," he said.

At Stockholm Furniture Fair – the biggest annual furniture trade fair in Scandinavia – Neri&Hu designed the main installation in the entrance hall, a house-like structure made from blackened wood that housed products designed by the pair.

Speaking at the fair Rossana Hu said that the west's rising interest in Chinese design was down to a mixture of curiosity and a growing awareness of China's creative boom.

"There's a new generation of creatives who are doing amazing work exploring issues, exploring materials and working with technology," she told Dezeen.

"The west has always been curious about progress in China and in some ways the creativity of China defies all notions of the past, that China is a place of copying." 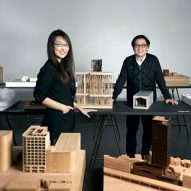 Neri&Hu gave a keynote speech as international guests of honour at IDS Toronto, a four-day interior design show in the Canadian city.

They were also judges for the rising Chinese talents exhibition at Maison&Objet. The exhibition was presented in collaboration with Shanghai design consultancy DesignChain.

The consultancy's CEO Stephanie Zhao told Dezeen that they had recently begun working with more designers from China.

The 11th Design Biennale Saint-Étienne opens on 21 March and runs for a month, with a series of conferences, debates and exhibitions across the city.

Zhe's three-part exhibition is a central pillar of the biennale. The first part is Road of Chinese Design which comprises a 70-year history of design from China. This is accompanied by a section on modern Chinese design, before the exhibition looks to the future by focusing on Shanghai and Shenzhen.