The photography series, called Barcelona from above, captures the Instagram-friendly symmetry of the city's architecture.

Included in the series are shots of Bofill and his collective Taller de Arquitectura's Walden 7 apartment development.

The labyrinthine block is formed of modules, so a single occupant can live in a studio flat or a family can live in four or five modules over two floors. There are two communal swimming pools on the roof.

Built in 1975 in the suburb in Sant Just Desvern, the 446-unit apartment complex is named after a utopian community from 1940s sci-fi novel Walden Two.

The 15-storey building is formed of towers of stacked cubes connected by walkways with curving bays. The central space left open between the towers and internal courtyards form a symmetrical gap that opens to the sky.

It was originally covered in blue ceramic tiles but these were removed in 1995 and the whole structure painted red when loose and falling tiles became hazardous.

"Walden 7 was always on my bucket list," Mogyorósy told Dezeen. "I've thousands of pictures from there on Instagram. Bofill's utopian vision is photogenic from everywhere." 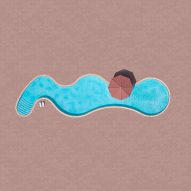 Mogyorósy has been photographing using a drone since he was gifted a DJI Mavic Pro Quadcopter for his 18th birthday in 2018. Barcelona from above shows a side of the Catalan capital that is rarely seen by the human eye.

The city expanded beyond its cramped medieval walls in the 19th century under the urban plan of engineer Ildefons Cerdà. He undertook a radical project to give residents wide streets, sunlight, and access to services regardless of wealth.

Mogyorósy's drone photos highlight the geometry of Cerdà's Eixample district, which is arranged in a neat grid with octagonal intersections. Chamfered corners on the block allow for better lines of visibility.

Barcelona from above also captures the places where the city meets the Mediterranean sea.

Mogyorósy's series shows how prevalent the terracotta colour palette is across the city. Many architects look to these rooftops for inspiration, including an apartment refurbished by Escolano + Steegmann, and a shoe shop designed by Kengo Kuma lined with concave ceramic tiles.

The city's most famous piece of architecture, the Sagradia Familia, is absent from the set as you can't fly drones above it. Antoni Gaudí's masterpiece, which is still under construction, made headlines last year after it was revealed it had been building for 136 years without an official permit.

Photography is by Márton Mogyorósy.