Ricardo Bofill, the Spanish architect behind the Walden 7 apartment building in Catalonia, has passed away at the age of 82.

The news of Bofill's death today was announced by his studio Ricardo Bofill Taller de Arquitectura (RBTA), which shared three old portraits of the architect on its Instagram.

Other key projects from Bofill's six-decade-long career include the Les Espaces d'Abraxas housing complex near Paris and, in Spain, the Castell de Kafka and La Fábrica – a repurposed cement factory containing the RBTA headquarters and Bofill's family home.

Bofill was born in 1939 in Barcelona. He completed his architectural training at the Geneva University of Art and Design in Switzerland before founding his studio aged 23.

Much of the studio's early work is celebrated for its unusual and monumental aesthetic, which has led it to be used as a stage for Hollywood films and video games. 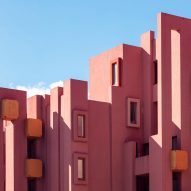 In the last decade, Les Espaces d'Abraxas featured in the dystopian movie The Hunger Games: Mockingjay, while La Muralla Roja informed the design of the Monument Valley game.

Bofill received a number of awards for his work, including the Ciudad de Barcelona Prize of Architecture for La Fábrica and The Israelí Building Center's Life Time Achievement Award.

He was also an honorary fellow of the American Institute of Architects and the Association of German Architects.

The main image of Bofill is courtesy of Ricardo Bofill Taller de Arquitectura.