Gavin Green is responsible for design at theatre consultancy Charcoalblue. He explains how he came to work on major renovations of theatres across the globe, in this interview for the Dezeen Jobs careers guide.

Green applied for a job in theatre consultancy after finishing his architecture degree, despite not having a theatrical background. He soon found himself working with Michael Wilford on the Lowry in Salford and Behnisch and Behnisch Partners on the failed Harbourside Centre in Bristol, and "was hooked".

It was working under renowned lighting designer Richard Pilbrow that Gavin met the future co-founders of Charcoalblue, and the company has since worked on the major overhaul of London's Royal Opera House and the Stirling Prize-winning Liverpool Everyman.

He says his career highlight was working on St Anne's Warehouse in Brooklyn, "a highly unconventional theatre built inside an old Civil War era warehouse which has the most beautiful brick walls sandwiched between Brooklyn and Manhattan bridges, looking across the East River." 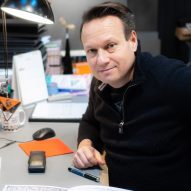 Green's team consists of architects, engineers, lighting and sound designers, and set designers. "We seek out people with a passion for performance," he said. "We ask about the shows they've seen in interviews as a test, to get them to describe how the production sat in the theatre."

"We also give our staff two free theatre tickets a month to ensure they stay engaged and energised by performance and the latest technologies – and to get them away from their desk!"

Green's number one tip to those that want to go into spatial design for live performance is to "go to the theatre lots! And to concerts, and dance, and immersive work."

He also reinforces the importance of remaining positive.

"Architecture and construction are hard work at times, but that doesn't mean you can't enjoy the process," he added.