Makeup looks seen online could be downloaded and printed directly onto the face, using a gadget concept imagined by UK studio Seymourpowell.

Élever looks like a handheld mirror but is actually a printer that combines 3D-fabrication, facial recognition technology and AI-powered image analysis to apply makeup.

Seymourpowell created the concept design as a way of exploring the findings of a global research project it has conducted into the future of beauty over the last two years.

In particular, Élever is inspired by a strand of the research looking at the influence of social media.

"Throughout our research we witnessed users harvesting social media for inspiration as the first step in their makeup regime," said Seymourpowell director of futures Mariel Brown.

"One respondent even searched the hashtags of the event he was heading to that night, as part of his getting-ready ritual, with the intent of optimising his chances of creating impact, effectively responding to style trends in real-time."

While beauty vloggers and influencers attract huge followings on YouTube and Instagram, their followers will often try to replicate the looks they've seen online.

Élever would allow people to achieve the looks they've seen on the internet without having to buy new products or learn how to apply them.

This subverts the need for the traditional product-development cycle, which Seymourpowell notes lags behind social media-fuelled beauty trends.

"The growing consumer desire for immediacy is currently frustrated by the realities of the physical world," said Brown. "Traditional product development cycles, existing supply chain restrictions and retail channel norms are fated to run at a much slower rate than the online world of beauty culture."

"Our research indicates that to successfully meet the demands of tomorrow's beauty consumers, we need to challenge these established systems and become more agile."

The company suggests that influencers and brands could use Élever as an additional revenue stream, selling makeup looks online for direct download.

However, it also notes that there could be issues around homogenisation and copying, given the product is equipped with artificial intelligence that could analyse images for the purposes of replication. 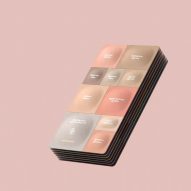 "Élever helps us imagine possible futures in which makeup artists, cosmetics brands and beauty influencers are able to sell makeup looks online and either the social media channels on which their images are accessed become e-commerce platforms or new platforms are created specifically," said Seymourpowell designer Robert Cooper.

"Alternatively, as with the digitisation of any art form, will the plagiarism of professional makeup artist work become prevalent?" Cooper asks, whilst stressing that it's important to be "at once optimistic and pessimistic" about advancing technologies.

"With Élever we primarily hope to promote debate on the ways in which technology could create efficiencies between the physical and virtual worlds to feed the desire for greater spontaneity," he continued.

"We also hope to encourage discussion on human creativity and machine intelligence. We are only starting to understand the creative potential of algorithms. Will AI expand human creativity or restrict it? The answer is most likely both."

The studio has released a set of visuals and videos imagining Élever as a gadget finished with fabric detailing and embedded soft lighting. It sits in a terrazzo base, where product cartridges are contained.

Seymourpowell says the design preserves the sense of "intimate and glamorous ritual" that putting on makeup can be.

Élever is the second of three concept designs Seymourpowell has created to tie in with its Understanding Beauty Consumers of 2020 report. The first, Identité, was a cosmetics service that would curate products based on artificial intelligence and user data.

Seymourpowell is a multidisciplinary studio that often works with emerging technologies. Among its previous projects are the modular Fairphone 2 and virtual-reality software for collaboratively designing cars.