March 2019 was the best-ever month for traffic to Dezeen, with over three million people visiting our site for the first time! British illustrator Toby Melville-Brown created this image to celebrate the milestone.

In total, we received 3,154,651 visits, and over 10.5 million page views, according to Google Analytics. Traffic was boosted by a surge in mobile and tablet visitors, who together contributed 1.7 million visitors.

This year is turning out to be a record year for Dezeen. January 2019 was our most successful month ever for page views, with just under 11 million pages served.

Our audience for the first three months of this year is up 6.5 per cent compared to 2018, with mobile traffic up more than 20 per cent. 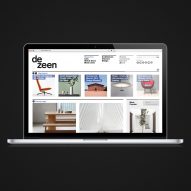 This follows best-ever traffic in 2018, with 25 million visits in total. This was seven per cent more than the previous year and was our 11th consecutive year of audience growth.

This year has also seen Dezeen top a million likes on Facebook. We are set to hit two million Instagram followers within the next few weeks.

Earlier this week we had our first awards success of the year, with our short movie Elevation named as an honoree in the technology video category at the prestigious Webby Awards.

Thanks to all our readers! Illustration is by Toby Melville-Brown.