Lighting suspended from belts and lamps that appear to grow out of tables were launched as part of Flos' extensive collection at this year's Salone del Mobile.

Pieces shown by the brand also included two reissues – the Chiara lamp by Mario Bellini from the 1960s, and a re-release of the first edition of the brand's Bulbo lamp – a 1957 design by Achille and Pier Giacomo Castiglioni.

The latest Flos collections were exhibited as part of Design Holding for the first time, at their mammoth Salone del Mobile stand. The new furniture and lighting group showcased its brands in three distinctive areas of an all-white, 4,000-square-metre stand designed by Calvi Brambilla.

Formafantasma's WireLine is composed of an LED light source within a ribbed glass extrusion and supported by swooping lengths of flat pink rubber cable designed to look like belts.

"The lamp plays on the contrast between the industrial feeling of the rubber and the sophistication of glass," explained Formafantasma founders Andrea Trimarchi and Simone Farresin.

Haeru consists of eight parts in total: three types of tables, two types of light fixtures and three supporting legs that can be used to create custom configurations.

"The basic structure of the object is made of a three-legged table with a built-in battery. Two of the legs are cut shorter, thus allowing the user to change and add light fixtures and tabletops depending on their preference," explained Nendo.

"The object's name, Haeru, means to grow in Japanese and refers to the way that the tables and lamps appear to be growing out of each other."

Following on from the success of Aim, the popular minimal suspension lamps designed by Ronan and Erwan Bouroullec that were launched in 2013, the French designers have created Belt.

Like Aim, Belt is a suspended lighting system with an unusual suspension element. For Belt, the designers have devised a system that connects leather-wrapped linear LED lighting modules with soft and flexible leather belts secured by buckles.

"Belt is a line that can progress endlessly. The line can grow into the space, rotate, rise or fall. Of course, the leather is a key for Belt. It has some freedom, but also a certain stiffness that makes the line harmonious."

Available in different heights and configurations and inspired by the structure of a flower, Caule is an outdoor lamp with a flexible and slender stem that Urquiola describes as "almost a natural element".

Meanwhile, the Flauta is an indoor lamp particularly suited to contract environments. Its cylindrical body, which comes in three different shapes, two textures and four finishes, is inspired by the shapes of organs and flutes.

"The spotlights in this collection stand out thanks to a small circular reflector that captures and reverberates the light emitted," explained Urquiola.

Long term Flos collaborator Michael Anastassiades has created four new lights for the brand. These include a lighting system called Coordinates that consists of horizontal and vertical strip lights that form custom illuminated grid-like structures across the ceilings.

A second lighting system by Anastassiades, called My Circuit, is made up of simple individual curved and linear sections that can be joined together to create custom configurations. Mounted on the ceiling, the curved sections can be used in tandem with five pendant fixtures which are fixed along the track.

Another outdoor lamp in the 2019 collection is designed by Philippe Starck. Called In Vitro, the series consists of bronze or silver aluminium lanterns in four variations – a ceiling lamp, three different sizes of floor lamp, a wall lamp and an "unplugged" portable version.

"The collection of outdoor lamps imagined for Flos is a little miracle," said Starck. "Since forever, the lightbulb is protected by a glass globe. Today, this disappears in favour of the light. It is the both poetic and surrealistic idea of dematerialised architectural lighting and the memory of the space occupied by the light."

During the Salone, chairman of Design Holding and CEO of Flos Piero Gandini, revealed to Dezeen that he is exploring ways that Flos and Louis Poulsen, which both produce lighting, can find efficiencies. 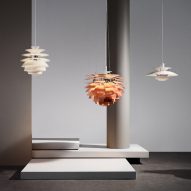 "The two companies can perfectly work together," he said. "We are already sharing procurement offices. Flos is starting to distribute Louis Poulsen in Italy."

The annual Salone del Mobile this year took place from 9 to 14 April and is a key part of the sprawling Milan design week.