Swedish product designer Simon Skinner has created a collection of afro hair combs that explore the effect of migration on Swedish identity.

Called Afropicks, the collection of eight different combs was on show as part of the Hemma Gone Wild exhibition by Swedish Design Moves during this year's Milan design week.

Skinner designed the combs to explore the ways in which identity could disrupt the perception of Swedish design. He chose to work with the afro comb due to its relative rarity in Sweden.

"As a mixed-race Swede with Afro-Caribbean roots I wanted to investigate how migration and multiculturalism is changing Swedish identity," Skinner told Dezeen.

"The afro comb is originally known as a wide-toothed comb for naturally wavy or curly afro-textured hair," he said.

"It's a symbol of black power and it represents a part of black culture. It is not easy to get your hand on such a comb in Swedish stores today, so working with this object was important to me in many ways."

Each of the eight combs relates to – and is named after – the personal experiences of black or mixed-raced Swedes interviewed by Skinner during the research process.

"It's a collection of eight combs where stories, functions and aesthetics are portrayed in different ways. Behind each comb is a story, behind each story is a person," Skinner said.

Femi, a 3D-printed aluminium comb with wavy teeth was based on the experiences of a mixed-raced Swedish man with roots in Nigeria. Although born in Sweden, he identified as a "Stockholmare" – the Swedish term for a person native to Stockholm.

Skinner engraved the comb with Femi's name in a font similar to that used on Swedish train carriages: "It's something that almost every Stockholmer can relate to," he explained.

Miliona, a cast-resin comb incorporates real human hair clippings in its design. These refer to a woman who used to chemically relax her hair in order to fit into the predominantly white neighbourhood where she lived.

"As a response to Miliona's story her comb is partly made out of afro hair. The comb preserves the hair and uses it as a decorative element. In this case, it's a statement on black beauty," Skinner said.

Bintou, a laser-cut acrylic comb references the vibrant colours used in fabrics from The Gambia. It is dedicated to a woman who despite feeling a closer connection to Gambian aesthetics, preferred Swedish design trends.

"That made me want to challenge the perception of what Swedish design is."

Another comb, Alexandra, with a thicker olive green handle and teeth was designed to resemble fingers, which the subject described as the "best comb", whilst another, Mille, is made of a series of three layered translucent combs in different sizes.

One comb, called Jade, is formed from several strands of bent steel that are held in place by a 3D-printed elliptical clasp, whilst another has a translucent plastic handle with neon button-detailing and is called Anton.

The final design, titled Jacqueline, has its handle incorporated into its light pink body, which features extra long teeth for a smoother motion through the hair.

During the research phase Skinner held workshops and group discussions to explore the idea of being in-between identities and how he might express these feelings in the design for the combs.

"We discussed race, in-betweenness and Swedish identity among many other topics. The outcome was crucial for the inspiration of this project and opened up many ways to translate stories and thoughts into an object," Skinner said. 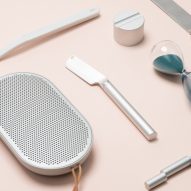 "In-betweenness is about living in-between, or outside different cultures at the same time," he added. "It can make you feel lost. I hope that the collection in some way embodies a positive side of in-betweenness."

The project won the Ung Svensk Award 2019, an award given to young Swedish designers. Other designers to win the award include Jan Klingler, whose Bacteria lamps are made by cultivating bacteria on a resin disc.