US researchers have invented a nanogenerator that could one day be added to solar panels to keep them producing energy when covered in snow.

The team, based at the University of California, Los Angeles (UCLA), designed the snow-powered tiny device to take advantage of the energy-producing potential of snow.

They call their invention a snow-based triboelectric nanogenerator, or snow TENG. It will generate energy by making use of static electricity.

Device would generate electricity from snow

The snow TENG is made of silicone, a material that has a negative charge. Snow is positively charged, so when they come into contact, they exchange electrons and produce energy.

"Snow is already charged, so we thought, why not bring another material with the opposite charge and extract the charge to create electricity?" said chemistry and biochemisty researcher Maher El-Kady, a member of the team and a co-author on the report they have published in the journal Nano Energy.

Although the snow TENG only produces small amounts of electricity, the team says that one day it could be useful as a complementary technology in solar panels. Snowfall generally disrupts the functioning of solar panels, since even when the sun does emerge on grey wintry days, it can't reach the device.

With snow TENG built in, a continuous power supply could be possible.

Snow TENG could be used for fitness tracking

More immediately, they envisage the snow TENG being used in fitness tracking. The device is self-powered, so it could make a good wearable device for athletes in snow sports.

It can also act as a weather station, collecting data on how much snow is falling and in what direction, as well as the direction and speed of the wind. 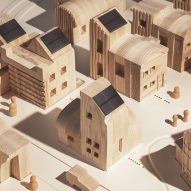 "It's a very clever device," said Richard Kaner, a senior researcher on the team who is also among the world's most cited scholars. "The device can work in remote areas because it provides its own power and does not need batteries."

The snow TENG is small, flexible and inexpensive to produce. Its thin silicone layer is attached to an electrode to capture the charge.

Kaner, El-Kady and their colleagues have form when it comes to energy-harvesting devices. In 2017 they created a solar-powered device that produces both energy and fuel, and this year they made a self-extinguishing motion sensor and power generator for firefighters.

Solar panels are an important source of renewable energy and integrated into many new buildings. A recent Space10 project called SolarVille showed how communities could combine solar panels with blockchain technology to create a neighbour-to-neighbour trading scheme.