Italian fashion brand Miu Miu has collaborated with creative agency M/M Paris to design a stool punched with holes that users can endlessly customise with a series of coloured pegs.

Sturdy and stackable, the M/Matching Colorstool is a three-legged seat made of linden wood, with 300 systematically distributed holes across its surfaces.

Described as "a board game without rules", users can playfully fill in the stool's holes with differently coloured wooden pegs that resemble oversized matchsticks, to create their own personalised patterns.

Taking its design cues from brutalist architecture, the stool shares the same basic, blocky form as the seats that fashion editors sat on to watch the Miu Miu Fall Winter 2018 runway show.

The show saw playful sixties-inspired garments paired with high quiffs, flicked eyeliner and buckled belts, with the same pops of colour that can be seen on the stools' pegs.

The M/Matching Colourstool made its debut at an installation during this year's Milan design week, which took place from 9 to 14 April.

Held in the city's Teatro Gerolamo, the installation aimed to reflect the "theatrical potential" of the stool, which can "perform fantasies and distort reality". 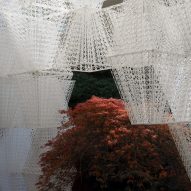 "This edition of the stool is a manipulative entity, like a board game without rules," said Miu Miu. "It will playfully transform to illuminate the personality of its owner, its circumstances and usage, while becoming its own colourful character."

"M/M Paris approaches objects as real-life symbols and combinatory elements that are part of a wider program of signs," the brand added.

"They have designed an object with the ability to morph, so that it can be altered daily to express a palette of emotions."

Just 300 of the limited edition stools were produced, and were on sale in Miu Miu's flagship store on Via Sant'Andrea in Milan with a window display entirely dedicated to the project.

Elsewhere in the city, French architect Arthur Mamou-Mani collaborated with fashion brand COS to construct an installation from 700 bioplastic bricks in the courtyard of a 16th-century palazzo for the annual design week.