Indian architecture office Nudes has developed a concept for a secondary school in Malawi, with a modular wooden structure and curved walls made from straw bales.

Nudes, led by architect Nuru Karim, created the concept for the Straw Bale School in response to a brief set by architectural competition organiser Archstorming, on behalf of an NGO called Active Africa.

Benga Parish, a missionary community 10 kilometres east of Lake Malawi and around 30 kilometres west of the Ntchisi Forest Reserve, is the proposed site for the school.

The competition brief called for a design that makes use of local materials and construction systems. Other key requirements were sustainability and the need for a modular solution that could be built in phases over several years.

Entrants were also asked to include a variety of spaces including classrooms, offices, computer rooms, libraries, laboratories and residential units for students and teachers, as well as outdoor spaces for animals and agriculture.

Nudes' proposal is based on a modular timber framework comprising a series of ladder-like wooden A-frames. The frames are arranged linearly to create forms that vary in height and width as the bases of the ladder components fan outwards.

The modular structure incorporates horizontal treads that support hay bales used to form the building's outer shell. Nudes suggests that alternative local infill materials such as earth and terracotta could also be used.

"We were keen to explore the usage of straw bales in the proposal with regard to its pedagogical narrative and exploring 'out of the classroom' learning environments manifested in the forms of amphitheatres," Karim told Dezeen.

The stringers of the ladders transfer the structural load and open up to create spaces that accommodate the school's various programmatic functions. 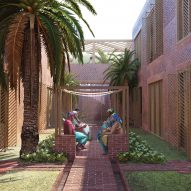 Its floor plan offers the potential for multiple units to be arranged in a pattern that would form a series of outdoor spaces for recreational activities.

Openings created by exposing the treads at eye level would offer light and ventilation. The topmost treads would also be left empty to create gaps along the ridge line that facilitate the circulation of fresh air.

Entrances would be incorporated into the ends of each module, where the structure is tallest. Internally, the narrower but taller spaces at the ends could also accommodate stepped seating and shelving, as well as services such as stairs and toilets.

Karim said that thorough research was conducted into the suitability of straw bales for this project, with several papers outlining its capabilities in terms of fire resistance and structural performance.

Although the proposal was not selected by the competition jury, the studio intends to continue developing prototypes to test its potential and is planning a pop-up urban-reading pavilion that would also utilise straw bales in its construction.

The studio has previously experimented with other unusual materials in its projects, such as a cafe in Mumbai that features walls, chairs, tables and lampshades all sculpted from pieces of corrugated cardboard.