Wood-lined rooms, shaded corridors and water walkways are just some of the features that Hilarchitects has incorporated into this meditation space in north eastern China.

Located in the rural outskirts of Cangzhou, a city in Hebei province, the meditation hall has been designed by Hilarchitects to let visitors "dissociate from their regular rhythm of daily life".

The meditation space was built in a row of six disused retail units that directly overlook sprawling wetlands. Although the interior had been broken up by a series of chunky concrete columns, the practice "build an inward world" within the site's existing structural framework.

"The architectural strategy here was to diffuse the volume, divide spaces into continuous but circuitous public spaces without retrieving the original structure," explained the studio.

The columns now delineate a long corridor that runs around the building's main timber-clad meditation hall. Murky-green slate tiles form the elevated walkway, which runs alongside a shallow pool of water – intended as a subtle visual nod to the marshy landscape outdoors.

Expansive windows on the building's front elevation have been covered with slim steel lamellas, allowing only a small amount of natural light to seep through to the interiors and thus create a dark, reflective setting for guests.

Surrounding walls in the corridor have been panelled in warm-hued wood. Some of the panels double-up as doors that can be pulled back to reveal the walls of the meditation hall, which are made up of layers of timber fins. 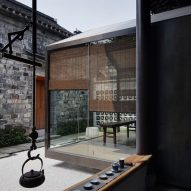 Decoration has been kept simple with a couple of seating cushions, long benches and black pendant lamps that dangle down from the ceiling.

The rest of the building holds a handful of other classrooms, which will be used for activities like yoga, tea ceremonies, or Ikebana – the Japanese art of flower arrangement.

Some of these spaces are punctuated by large glazed openings which look through to small bamboo garden to the west side of the building.

Last year, Karan Darda Architects completed a red concrete meditation space in Pune, India which includes a channel where ceremonial holy water can flow out into a surrounding orchard of trees. Chinese studio Ming Gu Design also added a meditation room to the centre of a historic family home in Nanjing.