Industrial designer Marc Newson has created soft-shell versions of Louis Vuitton's suitcases, making them lighter and more spacious on the inside.

Available in a wide range of colours, including yellow, orange, grey, black and brown, each is printed with a variation of Louis Vuitton's interlocking "L" and "V" monogram pattern.

A follow-up to his 2016 Horizon line of hard-cased luggage for Louis Vuitton, Newson wanted to maximise the interior volume of the suitcase while minimising its weight, creating a travel collection that is "lightweight, strong and resistant".

"After starting with hard luggage, where the parameters are naturally more defined and rigid, we have embarked upon stage two, which is the soft version," he said.

To achieve this, Newson opted for a thermo-formed, knitted outer shell, developed especially for Louis Vuitton, where custom technical yarn is knitted into a single structure and heat-formed into shape, before waterproofing. 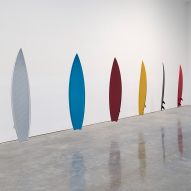 "I had to identify a suitable technology to give the project validity, I had to have a reason, something really compelling to kick the project off," he explained.

"That was to be the technology, which was not so much a technology, more of a process or a technique, a process that I was aware of through various other projects that I had been doing and essentially it's knitting," he said.

The "breakthrough" design also includes pockets and zips made using ultrasound cutting techniques, where ultrasonic vibrations are used to cut through an object.

Pockets were secured onto the luggage item using a special tape that affixes when applied with heat – a process described by Newson as an "elegant high-tech solution in keeping with the process used to build the fundamental shape".

The extendable, aluminium handle was also positioned on the outside of the case to allow for more space inside.

Last year, Marc Newson worked with Apple design head Jonathan Ive to create a ring entirely from a single diamond for sale at a charity auction.

A recent exhibition at Gagosian's Chelsea gallery in New York saw the designer work with Japanese swordsmiths, Czech glass makers and an American surfer to create a series of objects inspired by traditional crafts.