Swedish design duo Butler Lindgård has created textiles based on the female body, including carpets adorned with breasts and fabrics that look blood-stained.

The designers developed four figurative patterns for their Tits N Ass textiles: Nipple, Hairy, Traces and Stained. Each one relates to a supposedly provocative bodily issue such as breastfeeding, body hair, being overweight and menstruation.

Each design is applied to furnishings including rugs, linen throws, bolsters and cushions, as well as becoming textile wallhangings and prints.

Products include the hand-tufted Nipple rug produced with Swedish rug company Kasthall, the Traces linen throw, and by-the-metre hand-printed fabric in both designs, along with a further pattern called Hairy.

"The whole thing begun as a reaction to what we felt was a more conservative approach to breastfeeding in public spaces," explained the designers, Hanna Butler and Karin Olu Lindgård.

"We had both recently had our third child, and felt like breastfeeding all of a sudden was provocative to some people in a way we hadn't experienced before. Hanna even got thrown out from a museum for feeding her infant because no eating was allowed," added Olu Lindgård.

As textile designers they decided to investigate how they could make "abstract, yet direct" alternative representations of the body in a textile context.

"We thought the breastfeeding issue was ridiculous and joked a lot about it, but it also got us thinking about the representation of bodies in human spaces," said the designers.

"We talked a lot about patriarchal structures in public spaces, and what body types and body phenomenas got to be shown and which ones that had to be hidden away."

The Nipple rug is hand-tufted in a wool and linen blend and "builds upon an investigation of the patriarchal structures in public spaces".

"We feel like public spaces often are designed from quite a masculine, serious point of view. The Nipple rug is a statement piece that contradicts all of that," explained the designers.

"A bit of feminist fun makes the perfect contribution sometimes," they added.

The designers have also applied the Nipple design to socks and a light dressing-gown, as well as producing a number of limited-edition art prints.

For Traces, the designers used their own bodies to create patterns in paint. They teamed up with choreographer Emma Ribbing to develop movements that they repeated on huge pieces of paper covered in paint.

"The pattern is the result of a choreographed dance and movement experiment, where our bodies and movement patterns made patterns on to the floor," said the duo.

They initially applied the resulting pattern to linen throws. Each throw is dyed by hand, then printed, sewn and fringed by the designers in their Malmö studio. 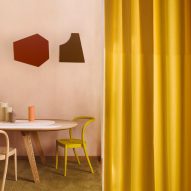 For Stained, the designers developed a pattern intended to look like blobs of period blood. They turned fabric printed with the design into a series of bolsters.

The designers use textiles to address these issues as they believe it allows difficult topics to be discussed in an open way.

"We feel like the textile medium historically is seen as a soft and friendly one, which makes the boundaries a bit looser," said the designers.

"Our period blood-inspired textiles are more often read like beautiful, sheer and funny then provocative, which might have been the case using another material."

Butler Lindgård's designs were recently on show in the gallery space at Wånas Konst, a sculpture park and art gallery in the grounds of a medieval castle in the Skåne region of southern Sweden.

Other designs that take menstruation as a jumping off point include Thinx's Period Sex blanket, which has an absorbent under-layer and leak-resistant barrier to allow women to have sex during their period without getting blood on the sheets.