The set and lighting designers behind UK rapper Dave's Psychodrama tour took the lights on the audience's phones into account when creating the show.

Award-winning lighting designer Tim Routledge and creative studio Tawbox, made up of Chris Jablonski and Amber Rimell, worked with the London artist on his UK tour, which closed at the O2 Academy in Brixton, London, earlier this month.

The tour saw the rapper perform tracks from his debut album of the same name to audiences across 14 cities, against the backdrop of a skull and a bank of immersive digital panels.

Speaking to Dezeen, the designers said that the set was heavily influenced by the way audiences light up the stage and record gigs with their phones.

"It's really hard to do anything moody these days because of bloody mobile phones," said Jablonski.

"It wasn't many years ago that you could sneak the artist in, bring up the lights and everything goes mad," he explained.

To account for the light given off by mobile phones in the audience, two hydraulic-powered trap doors were built into the floor to lift Dave and his special guests onto the stage without being seen.

"The stage has lifts built into it. He comes out of that lift that gets dropped down, he gets on and that's brought up," said Jablonski.

For the London "homecoming" shows, Dave performed in front of a five-metre-tall skull made of fibreglass and polystyrene and fitted with lasers, smoke machines and dry ice, which acted as the main visual focus for the audience.

"The skull was built in two weeks. It is loaded with lasers inside, it has CO2, smoke, dry ice. It lights beautifully, you can make it look evil or weird or psychedelic," lighting designer Routledge told Dezeen.

"It's always in the centre. It's not moving, but everything is framed around it," he explained.

The skull is taken from the Psychodrama album cover in which Dave's head is on fire: "This is what is left," said Jablonski.

Dave performed on a stage laid with square digital panels, in front of a huge screen. Both the floor and the screen projected bespoke video content throughout the show.

"This show's designed so that wherever you look, it's really cool," explained Routledge.

Positioned diagonally across the venue ceiling was a "theatrical conceit" of controllable fluorescent tubes that lit up the stage and changed position throughout the performance.

For the track Black, the stage was filled with low-sitting smoke and soft backlighting, while light projections made the skull look like it was crying.

"That type of imagery when he's backlit is just fucking stunning," said Jablonski.

Later on, the backdrop was divided so that one half was projecting videos of people in Lagos, Nigeria, while the other half showed corresponding situations in London.

One of the most memorable moments is the one that accompanies Dave's segue into his older tracks. The artist had requested to include his old songs a day before his first London performance and wanted the tracks to appear on stage as a wheel of fortune.

The resulting speedily finished video featured the rapper's face in real time projected as spinning on to the digital screen, which was made to look like a wheel of fortune.

"What we then did was put a live camera in to shoot him in real time in a circle with the spinning disc on top. That was made in an hour," said Routledge. 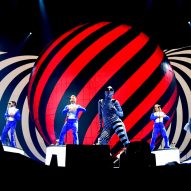 Another track Hangman transformed the stage into a giant game of guessing game hangman, where the traditional drawing was shown to one side and the wrong letters on the floor.

"If all of this digital panelling wasn't here, all the rapper will do is walk at the front of the stage the whole show. It's the way the music has evolved in small dirty clubs to be as close as possible to the people, and dropping him into this, turns him into an artist," said Jablonski.