Gauzy white curtains and subtly patterned floors help organise the layout of this events space, created by architect Mary Duggan for the Science Museum in London.

Occupying the fifth and sixth floors of the Science Museum's building in South Kensington, the two-room facility is designed as an "ever-changing theatre of activity".

Since the 1980s these rooms had been used as galleries dedicated to the history of medicine, with very little natural light.

To make them more suitable for hosting events, Mary Duggan and her team focused on getting rid of the "black box" appearance.

"Our approach to the design of the building has been one directed by a strong motivation to create visually and spatially distinctive interior environments, with the flexibility to provide for the needs of any user," explained Duggan.

"Such a brief could easily default to a numb definition, a space defined only by the parameters of the functional parts," she continued, "so it was important that we created a space with its own identity."

Each floor is now split into a "served" zone that accommodates visitors and a "service" zone that contains ancillary functions, which are hidden behind pale partition walls. They are connected via a new, all-white staircase with a metal handrail.

Grey resin flooring in the visitors' area is printed with huge overlapping circles, intended to emulate the geometric colour experimentations that American-German artist Josef Albers produced in his 1963 book Interaction of Colour.

The patterns on the floors also serve as visual markers for how seating can be arranged during events.

Sheer white curtains set on tracks that wind across the ceiling can be drawn to create separation between different parts of the rooms when required.

This is loosely inspired by Cafe Samt & Seide – an exhibition stand that architect Mies van der Rohe and his collaborator Lilly Reich created for a German fabric company in 1927, which featured a series of coloured-silk hanging partitions.

To make the space seem more spacious, the studio chose to open up the false ceiling and reveal a network of service pipes underneath. A large window also punctuates the front elevation, flooding the interiors with natural light and offering views across the rooftops of central London. 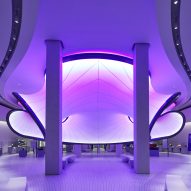 "Each room converts into a sequence of spaces to serve multiple occupation typologies, some yet to be discovered," added Duggan.

Mary Duggan founded her studio in east London in 2017, after leaving the now-defunct Duggan Morris Architects. This is one of the practice's first completed projects.

It is one of several recent interventions to the Science Museum by notable architects. In 2016, Zaha Hadid Architects completed a new mathematics gallery for the building, which emulates the shape of a wind tunnel in a 1920s plane.

That year also saw Coffey Architects add a perforated facade to the museum's library, and Muf create an interactive gallery that includes playground slides and a giant model of the solar system.