These exclusive photographs show Neri&Hu's Aranya Art Center, which opens today in Qinhuangdao on the Aranya Gold Coast in China.

The art gallery in the Gold Coast seaside resort makes extensive use of concrete, inside and out, with the Chinese design studio likening its appearance to "a solid rock sitting firmly in the shifting environment".

The facades of the building are made up of a series of faceted concrete blocks, punctuated by occasional windows with bronze surrounds.

Most of the concrete modules are solid, but some feature openings at the back to allow light to pass through.

The building is arranged around a large conical void, which is finished with smooth concrete. Designed to be a communal space for the residents of Qinhuangdao, this space has seating arranged around its edges to form an amphitheatre. 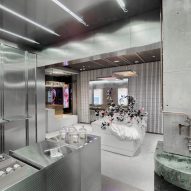 When not being used for performances, this stepped space will be filled with water to transform it into a pond.

"Drawing inspiration from the seasonal ocean waters nearby – azure and calm in the summers and splintered ice through winter – the building design attempts to encapsulate the natural wonder of water at its core," said Neri&Hu.

The building's galleries are arranged around this central space. The entrance, cafe and a multi-functional gallery are on the ground floor, with five gallery spaces on the floors above and a viewing platform on the roof.

"Within the thick mass of the building volume is a series of interlocking spaces that visitors can meander freely within, slowly ascending, enjoying a choreographed journey with directed views both inward and outward," explained the studio.

The Aranya Art Center is one of numerous art galleries that are opening in China.

Shanghai-based design studio Neri&Hu was formed by Lyndon Neri and Rossana Hu in 2004. Along with architectural projects like the Valextra and Little B stores in Shanghai, the studio creates a broad range of products, from modular rugs and sofas to lamps.