A four-metre-wide path now hangs underneath the Pont Adolphe bridge in Luxembourg, with a lightweight steel system that acts like a "well-controlled spider's web".

Local studio CBA Architects, led by Christian Bauer, designed the Passerelle Pont Adolphe. It creates a pedestrian and cycle path beneath the 153-metre-long bridge, which was built in 1903 and is one of Luxembourg City's most important architectural structures.

The city wanted to improve connections between the historic part of the city, the Vallé de la Pétrusse, and the 19th-century urban expansion area of the Plateau Bourbon.

It was decided that a new bridge would have too great an impact on the city, which is a UNESCO world heritage site. Instead the city chose to widen the century-old bridge by 1.5 metres, which allowed for the addition of a tram route but not enough space for a bicycle path as well.

The brief given to Bauer was to create a pathway in the space between the two sets of arches that support the bridge.

The overarching aim was to keep the visual impact of the pathway at a minimum, so it was important to keep each of the visible structural elements as slender as possible.

"At the beginning of the project, many people were afraid of the impact on the Pont Adolphe," Christian Bauer told Dezeen. "That the image of the historic bridge should not be denatured."

"Luxembourg has many historical sites and elements. During an intervention with a contemporary element, there is always the question how to connect them or how to contrast them," he added.

"This problem is neither new nor unknown in Luxembourg. But in this case the solution with the cycle path under the existing bridge is definitely unique for Luxembourg and for Europe itself."

The epoxy-coated deck of the new structure is attached to reinforced concrete slabs under the existing bridge's deck using a series of slender anchors and cables that hang at a five-degree angle.

Shock absorbers were installed in the abutments of the bridge to help absorb more of the pressure from the new addition. The new structure is also fixed to the bridge pieces and pilasters in four places to help it resist the wind.

"It was designed in the context of the renovation of the Pont Adolphe bridge so that all the necessary elements could be integrated into the deck of the bridge," said Bauer.

"After this preparation, the construction of the cycle path was appended in prefabricated elements of 30 metres length." 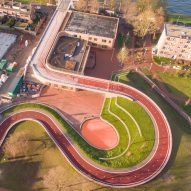 "The deck has a triangular shape in a metal box," explained the architect. "It has been designed to keep the height to a minimum and to have a light and filigree structure so as not to damage the historical image of the bridge."

The 1.4-metre-high guardrail is made from a metal mesh that also helps reduce the cycle path’s visibility when viewing the Ponte Adolphe.

The architect described the total effect as being "like a well-controlled spider's web, barely visible from the outside", adding an unexpected contemporary detail to the bridge's architecture.

Cyclists access the bridge via tunnels with elliptical skylights, while pedestrians can reach it using new staircases incorporated into the design.

The Passerelle Pont Adolphe opened at the end of 2018 and is heavily used by local residents as well as tourists. It was among the projects longlisted for this year’s Mies Van Der Rohe prize.

"Perhaps in this case there could be other solutions like common areas and shared spaces instead of a separation of the different road users, so that everyone has to take care of the others a little, and that is a kind of improvement for the 'togetherness' in a city," he said.

"For this we just have to be open minded."

In 2014, Foster + Partners revealed a concept for an extreme version of a separated bike path with SkyCycle, a proposal for a network of elevated pathways over London.

More realistic raised pathway projects have recently been completed in China and the Netherlands.

Photography is by Christian Bauer unless stated otherwise.