Rama Estudio has fronted this apartment block in Ambato, Ecuador with wooden louvres to encourage interactions between residents and passersby.

Edificio Criba is located in the residential neighbourhood of San Antonio. Rama Estudio, an architecture firm with offices in Quito, designed the property to improve the area's street life, which it says has been in decline in recent years.

"The homeowners who once lived in this area have changed, and the united neighbourhood that once existed has become a walled neighbourhood, lacking in community and public space," said Rama Estudio in a project description.

Instead of putting up a compound wall around the 400-square-metre building, Rama Estudio designed a permeable facade that provides residents views to the street. It also allows pedestrians to catch glimpses of the inner life of the building.

"Seeing and being seen is part of a response to the lack of communication and insecurity that has been experienced in recent years, where the streets delimit their journey with high walls totally impermeable to a daily reality," said the studio.

The three-storey building's front facade is covered with vertical wooden louvres, which provide shade to the three residence's exterior terraces. An open staircase made of weathered steel suspended metal cables is also visible beyond this screen.

The ground level unit has three bedrooms, and is organised to make the most of the site's irregular plot. "The complex angles of the land gave the pattern to generate light courtyards and spatial organisation on each floor," said Rama Estudio.

The two upper units each have two bedrooms laid out around the kitchen, which the architects describe as the "fundamental point of the home". One of these is the master bedroom, located towards the back of the building for more privacy.

The other room can be divided with a movable wall, allowing the space to be used in different ways. Possible configurations include two smaller bedrooms, an additional sitting area, or a combination of the both.

Rama Estudio sought to emphasise the building's concrete structure, leaving the slab exposed at the ceilings. "Wood and metal are the two materials that complement the structure in closures, facade, vertical circulation, details among others," it said.

Rama Estudio recently completed a rammed-earth dwelling with an angular roof and clerestory windows in the south of Ecuador. A number of projects are also underway in Quito, the country's capital, including a a rounded apartment building designed by BIG with earth-toned tiles covering the exterior.

Photography is by Jag Studio. 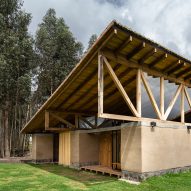