London studio Pearson Lloyd has unveiled a family of mono-shell seats that are designed to be as simple as possible without losing sturdiness.

Characterised by their fluid lines, the Kin collection is made up of plastic chairs and stools that come in eight bold colours.

The range is being produced by Allermuir, a brand that Pearson Lloyd has collaborated with for 15 years.

Pearson Lloyd refers to Kin as a family of related pieces, hence the name.

All the pieces were designed concurrently to ensure that they had a consistent design and unified identity from the outset.

For each seat, the designers tried to use the minimum amount of plastic and aluminium without sacrificing structural integrity and sturdiness.

The curved shells come in a variety of forms: Side comes without arms, Tub features curved arm supports, while Arm has a cut-out arm rest.

All the chair shells can be modified to feature different bases, including four metal or wooden legs, or an archetypal four or five star metal base.

The stool is available with a four-leg frame in either metal or wood.

The seats can be further customised with upholstery. All the shell styles apart from arm can be fully upholstered or come with inner or seat upholstery, whilst the arm version is offered with an upholstered seat.

The sinuous take cues from the natural world – the designers are suggesting the form that plastic might take if it were left to shape itself. 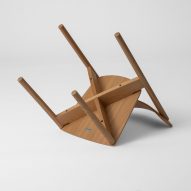 "One of the concurrent themes that runs through our work is trying to find seemingly natural solutions to complex mechanical problems," said PearsonLloyd co-founder Luke Pearson.

"So often, the right solution is also the most aesthetically pleasing one. Nature has long been a source of inspiration in that it always finds the path of least resistance like water eroding stones or flowing over sand on a beach."

Kin launched as part of Clerkenwell Design Week, which took place from 21 to 23 May in London. Other collections on shown included Established & Son's At Work, and two collections of tiles by Barber and Osgerby for Mutina.